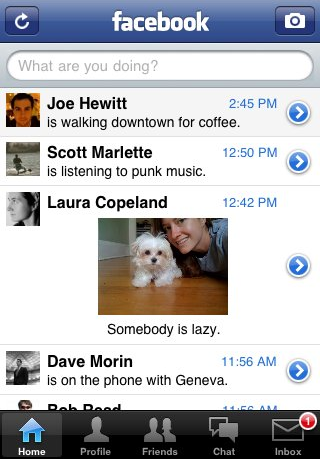 Today, Facebook has launched a new iPhone application, that directly targets messaging service Twitter as well as for-pay mobile text messaging services. The new application is a mobile status service that includes instant messaging functionality. It builds on Facebook friend relationships, but ignores a lot of the traditional social networking features of the site, such as profile info about what your favorite movie is.

So whether you’re on your phone or your computer, you’ll be able to chat with Facebook friends “for free,” as Facebook’s Joe Hewitt writes on the company blog today.

The “for free” part isn’t so much a dig at Twitter, which also lets you message for free, but a dig at simple text messaging services (also known as SMS), that cost money to use.

VentureBeat’s MG Siegler has extensively covered the slow death of SMS fees; considering that Facebook is popular with lots of young people who also like to SMS, this could very well speed up that process.

Also of note: Existing Facebook, and MySpace mobile applications have both seen dramatic worldwide growth recently. Considering this new application, as well as MySpace’s new iPhone application, other mobile-focused social networks should be concerned, unless they have a powerful means to differentiate themselves.

This app is also “just a glimpse of the future,” says Hewitt. As the newly-available iPhone 3G has the ability to detect location, the company is looking at ways to “let you opt-in to share your location and discover nearby friends.” This, and other new features, will become available in the coming months, he says.

The app not only works with iPhone 3G, but the original iPhone and the iPod touch. You can download it on at the Apple App store.

Of note: The Facebook versus Twitter saga has been building for quite awhile. More than two years ago, Facebook came out with a feature called “status updates,” where users post short up-to-the-minute messages about what they’re doing. While we’ve noted that it doesn’t include all of the features offered by tech-popular messaging service Twitter, it’s certainly similar. Similar enough for the Facebook company blog to publish a post about some new status features last year, titled “What’s everyone up to?” It was a clear dig at Twitter’s main question to its users, “What are you doing?” and it suggested that more direct competition was on the way.

So yeah, lookee here at the new Facebook app. The question for its users is “What are you doing?

Genius steals — then creates something even more compelling.