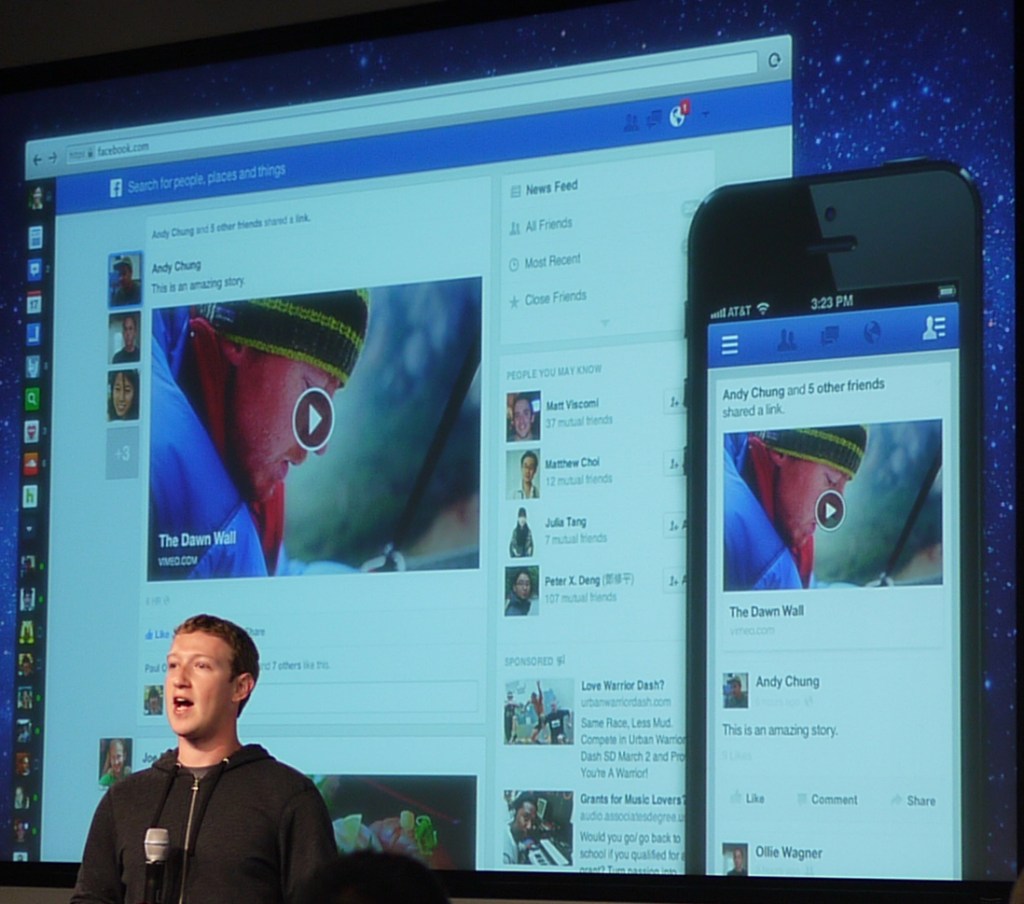 MENLO PARK, Calif. — Facebook’s News Feed has finally gotten a long-awaited, well-deserved facelift. It’s a design overhaul that fits right in with the company’s shift to a highly visual aesthetic over the past two years.

You will start seeing the new News Feed on the web today; phone and tablet updates should happen over the next couple weeks.

Above: This screenshot from Facebook shows off the old news feed style (left) and the new (right).

As founder and chief executive Mark Zuckerberg just announced at his company’s headquarters this morning, he wants Facebook’s News Feed to be each user’s “best personalized newspaper you can have” with social and local updates on a variety of topics.

“We also believe [it] should be visual, rich, and engaging,” he continued.

“Because News Feed supports such a broad range of content types, the format has to change as well. … News Feed has become primarily about visual content,” the CEO said, noting that currently, photos make up around 30 percent of all News Feed content.

Not surprisingly, photos are larger and more in-your-face in the new design.

The update is not unlike the upgrade to Timelines that launched back in 2011. At that time, the engineering-centric company put a fresh focus on photos, videos, and engaging, interactive content as opposed to text updates.

Zuckerberg continued to say that today’s updates bring to News Feed a triple focus: rich, visual stories; your choice of feeds; and a mobile-inspired U.I.

Facebook design director Julie Zhuo showed off some features of the new design, especially as it pertains to brands. Logos and thumbnails are larger, and pictures and videos take up more of the page. Overall, the interface feels much more like a glossy web magazine than the old, text-heavy Facebook you’ve been used to.

Here’s an image gallery of the new News Feed.

New options for different slices of the News Feed

Chris Struhar, the technical lead for the new News Feed, also gave some updates on new options for it. Facebook is listening to user feedback about its algorithms and the stories those algorithms deliver, he said. People complain that they see too few relevant stories from close friends, so now, they can jump between various types of feeds to focus on different kinds of content. 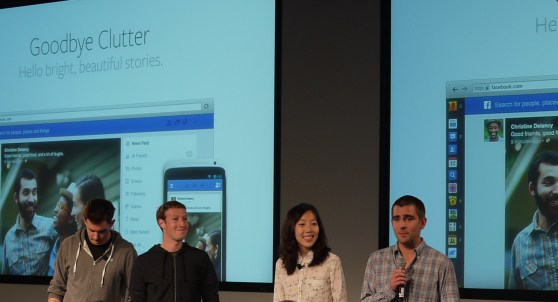 Above: Facebook employees, including founder Mark Zuckerberg, discuss getting rid of the News Feed clutter.

An “all friends” feed to give you a full firehose of updates. It also has a “following” feed to show only branded content from news organizations and companies you’re following — a much-requested feature from people. The “music” feed shows music-related sharing and activity, plus photos or updates from musicians’ Pages. And the “photos” feed shows off the visual side of your network.

“We’ve tried photo feeds in the past, but never anything as vibrant as what you see today,” said Struhar.

Mobile continues to play a big role in Facebook’s updates

Also, as Facebook exec Chris Cox pointed out, the design is mobile-inspired. While Facebook got its start a bit too soon to be mobile-first, it’s quickly playing catch up on mobile competencies and mobile interfaces.

Cox said today’s updates will bring more consistency between Facebook on the web and Facebook on mobile, fulfilling the network’s previously expressed goals about delivering Facebook everywhere without regard to platform.

“It’s amazing how much more modern and clean this feels just because we’ve adapted some of the things we’ve done for the tablet and for mobile and brought them to the web,” Cox said.

When Facebook’s Graph Search launched just two months ago, Facebook CEO Mark Zuckerberg said these three products — Timeline, News Feed, and Graph Search — constitute Facebook’s “three pillars” as a company and a web service. And in each of the three, he said the company is striving to focus on its roots, which lie in personal connections and information’s relevance to those connections.

And we Facebook users can’t forget that all this revenue hangs not on Timelines or Graph Search but on News Feed, which remains for now the sole money-maker among those three pillars. 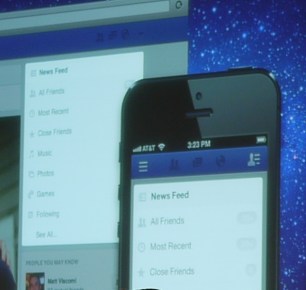 Above: Mobile is always top of mind for Facebook.

In the company’s most recent earnings call, we learned that advertising made up 84 percent of Facebook’s total revenue: $1.33 billion in the last quarter alone, which makes up 13.3 percent of the total online ad market.

Also, mobile revenue made up nearly one quarter of all ad revenue in Q4, for a (relatively) huge $306 million.

In fact, Facebook’s mobile ads — which didn’t even exist mere months ago — have led to a huge boom in the U.S. mobile advertising market.

“With 25 percent of revenue going to mobile in the fourth quarter, Facebook has cemented its position as the leader in mobile display advertising in the U.S. by a wide margin,” an eMarketer analyst told VentureBeat recently via email.