This new feature has just been added to the most recent version of Facebook’s iOS and Android mobile applications.

Perhaps more interesting, Facebook is also testing Voice over Internet Protocol (VoIP) calling (à la Skype). This product test will be rolling out first to Facebook for iOS users in — wait for it — Canada.

Finally, someone puts Canada first. Good on ya, Canadians.

“To use this new feature, simply tap the ‘+’ next to the box where you write a message, then tap ‘Record’ and hold down the record button to talk,” writes our Facebook source in an email.

“When you’re ready to send, just release the button. Letting go sends the voice message, sliding off it cancels the message.” 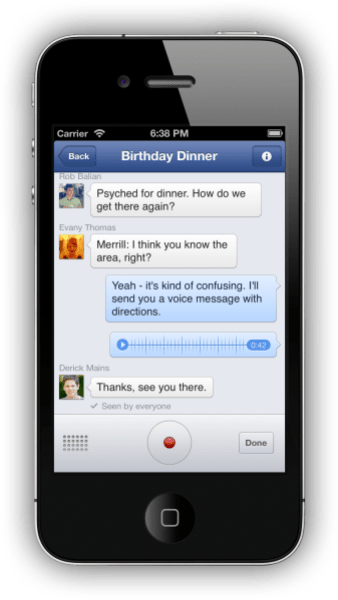 You can listen to voice messages either from the Messenger app or from Facebook.com.

To test the voice calling feature, Facebook iOS users in Canada can start a phone conversation with a Facebook friend by tapping the “i” button in the top right corner. From there, just tap ‘Free Call’ to start the VoIP call.

The VoIP calls use your phone’s data plan rather than your phone’s calling minutes. Anyone wishing to use VoIP calling features needs to update to the newest version of the app.

A Facebook source let us know that the company is evaluating the pilot program in Canada and will start looking at other geographies once Facebook gets adequate feedback from Canadian users.