Facebook is giving its controversial Messenger Kids app a new feature called “sleep mode” today, allowing parents to set specific times when their children aren’t allowed to use the app.

It’s been nearly five months since Facebook launched the child-focused Messenger Kids. In the time since its arrival on iOS in December, the app has graduated to Android, but on that same day a report emerged highlighting how many of the “experts” who had vetted the original Messenger Kids app were funded by Facebook.

The app is designed to be installed on a child’s device, with the parent able to control settings from their own Facebook account. However, growing concerns over the impact that digital devices and social media have on children’s emotional and cognitive development has led to calls for Facebook to ditch the app.

With new features such as sleep mode, it appears Facebook is pursuing parental appeasement as a means to getting more kids into the Facebook ecosystem at a younger age. The social networking giant has no intention of pulling the plug on what is a window into the Facebook world for those yet to reach the ripe old age of 13. 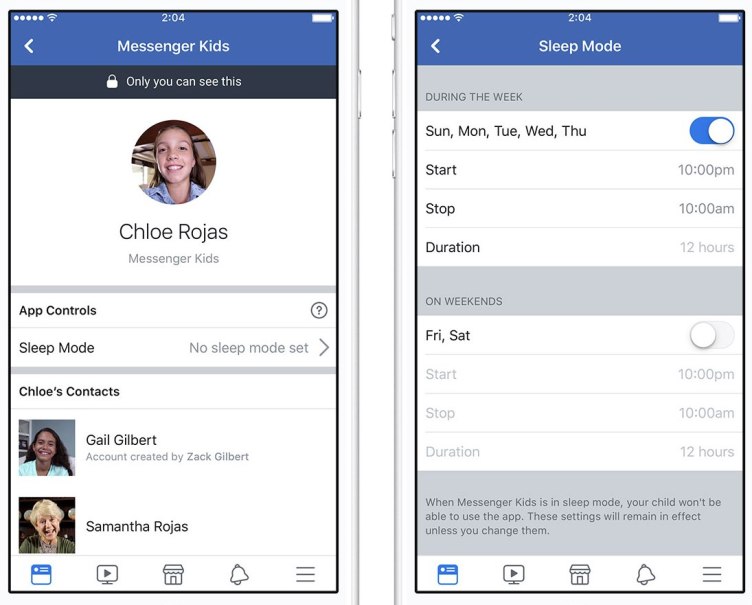 The settings are fairly straightforward. Parents access the control center through their own Facebook account, where they can stipulate when the app should be on lockdown — “during the week,” “weekends,” and at specific hours during those periods.

Or, if you’re concerned about how Facebook treats its users’ data in the wake of the recent Cambridge Analytica scandal, you can delete your child’s account completely from the main control panel.