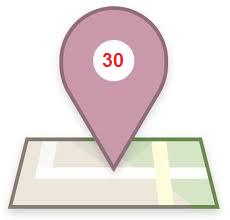 An inside source at Facebook is claiming that some 30 million of its users have used Facebook Places, according to Business Insider. With more than 500 million users, that number would mean that only about 6% of Facebook users have tried the newly launched feature.

Facebook revealed its plans for Facebook Places back in August with the goal of allowing users to share their location with friends, to see where their friends are, and to discover new places. Sound familiar? It’s pretty much the same goals as popular mobile check-in game Foursquare.  Foursquare co-founder and chief executive Dennis Crowley graciously noted this when we spoke with him during the Facebook Places launch. At the time, he was still deciding what he thought of the new Facebook feature.

According to Business Insider, Foursquare may be in trouble if Facebook users start to experiment with Facebook Places. While the new feature is pretty simple with none of the gaming or incentive features (offers, points and badges) found in Foursquare and other location-based services, Facebook could lure users away from location services if it decided to include those gaming aspects. According to a report by AllFacebook, Facebook just might be starting on incentive features already, with rumors that it’s testing a way for businesses to use the Places service to offer deals to their customers.

We agree with Business Insider that Foursquare doesn’t have anything to worry about just yet. The Facebook Places feature remains just that, a feature, not an experience like other location-based services, such as Foursquare. But if interest in the feature picks up, that could change.