Facebook announced its third quarter financial earnings today, revealing that it had $7.011 billion in revenue and an earnings per share (EPS) of $1.09.

For those of you playing at home, Wall Street analysts predicted the social networking company would have $6.92 billion in revenue and an EPS of $0.97.

“We had another good quarter,” said Mark Zuckerberg, Facebook’s chief executive, in a statement. “We’re making progress putting video first across our apps and executing our 10 year technology roadmap.”

On the user front, it’s just the gift that keeps on giving, as Facebook now counts 1.79 billion monthly active users, up 4.67 percent from last quarter’s 1.71 billion and 17 percent from a year ago. eMarketer said that it estimated there would be 1.43 billion users worldwide, so clearly Facebook has blown past that prediction.

While 1.18 billion people access the site daily, an uptick of 17 percent year-over-year, 1.09 billion will do so by mobile devices.

The company has a lot of things going for it to spur such growth, including the massive adoption of its Messenger platform, the push for virtual reality through its Oculus acquisition, and around photos and live video. It has also remained an advertising powerhouse and has shown its strength once again this past quarter.

Mobile advertising continues to play a big part in Facebook revenue generation, contributing 84 percent of its ad dollars. As a whole, advertising makes up 78 percent of the company’s total revenue for the third quarter. In the past several months, the social networking company has rolled out new ways for publishers and brands to monetize on its platform, including Instant Articles, but it has also come under fire with reports alleging targeting can be done by racial groups.

But that hasn’t deterred advertisers and publishers. In fact, according to AdRoll president Adam Berke, “Facebook continues to enjoy its position as a ‘must have’ inventory source within just about any marketer’s media strategy. The combination of highly engaging native formats and an array of targeting options powers the type of performance that modern marketers demand. Facebook is also benefiting from a mature API platform. As marketers look for opportunities to allocate incremental budget, it’s easiest to turn the knob up through advanced buying tools versus trying to figure out a whole new system or one that is still very new, like Snapchat or Pinterest.”

The company declined to break out revenue or any additional details from its individual properties.

“Facebook is clearly getting closer to monetizing Messenger and WhatsApp. In August, it made changes to WhatsApp’s privacy policy in preparation for allowing consumers to communicate more easily with businesses. And Messenger in September added buy buttons and native payments to the app,” eMarketer principal analyst Debra Aho Williamson remarked. 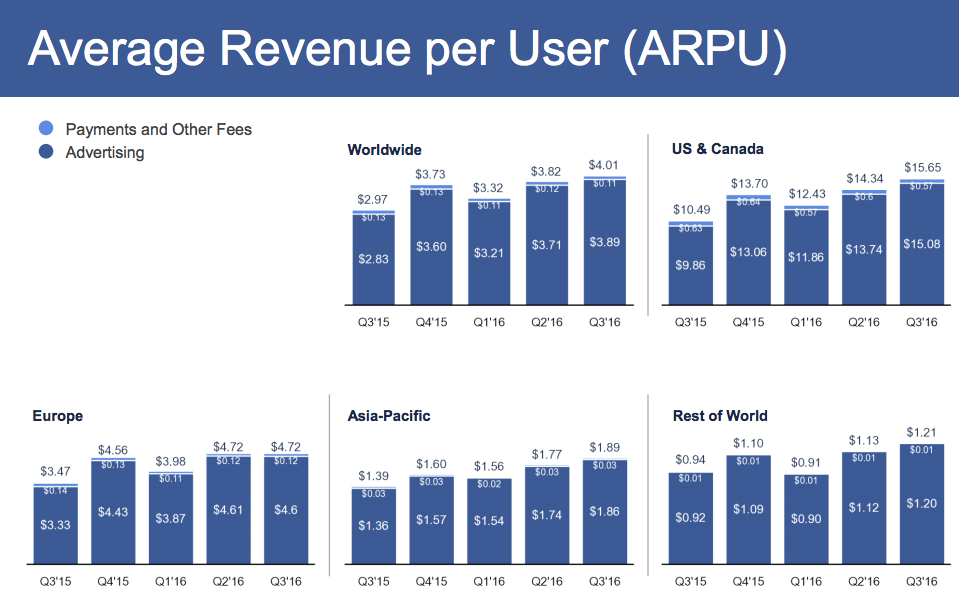 But as Facebook extends its reach beyond just being a social network, it’s encountering more competition, such as Twitter, Google, and Snapchat. Facebook hasn’t been too secretive with its intentions to take what’s good about the ephemeral messaging app and cannibalize it into its own apps, which is apparent with Instagram Stories and other recent features.

It’s also facing accusations about its filtering and censorship and criticism about its statement that it’s not a media company. Facebook has previously tried to assuage fears and allay suspicions by updating its policies and also explicitly stating that it’s not censoring newsworthy stories.