Facebook’s new archive for U.S. political ads — created to give users more information about who is advertising on Facebook and who they are trying to target — went live today. The archive was first announced in October.

The archive is available to view at facebook.com/politicalcontentads. The archive contains both ads promoting candidates for political office as well as those that Facebook has deemed to be “issue ads” — ads that touch on a list of 20 hot-button topics that Facebook released earlier this month. These ads will also be labeled in users’ news feeds starting today, with a “paid for by” tag. Political and issue ads on Instagram will also be labeled. 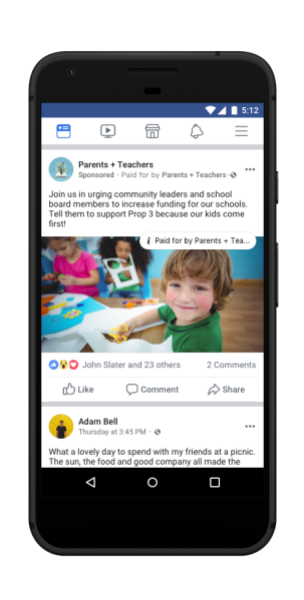 For now, Facebook’s archive only contains political and issue ads dating back to May. Ads will be kept in that archive for seven years after they go up. If a user sees a political or issue ad that isn’t included in the archive that they feel they should be, they can click on the three dots in the top right corner of the ad to report that ad.

Ads will be reviewed by both Facebook’s machine learning models and human reviewers in order to determine if the ad should indeed be in the political archive. In particular, the images and text of the ad, as well as who is being targeted with the ad, will be checked to determine if it should be labeled as a political ad. Facebook director of product management Rob Leathern said in a conference call with reporters that about 3,000 to 4,000 reviewers will be working specifically on looking at these political or issue ads.

Facebook also revealed today that it will be working with its Election Commission, announced in April, to launch an API for the archive that researchers and academics can use to analyze the ads.

Last week, news outlets protested the fact that any news articles they paid to promote that dealt with politics or one of the 20 issue topics would also be included in the archive. Facebook director of public policy Steve Satterfield said that it was still in “ongoing discussions with groups, including news publishers” about how to archive their ads.

On a conference call with reporters, it became clear that the biggest point of conflict that will arise in the future is which ads should be labeled issue ads. In a blog post about the archive, Facebook staffers wrote that, in the case of education, one of the 20 topics deemed to be an “issue ad,” the only ads that would be labeled would be “those trying to achieve a political purpose, for example, education reform or a new student loan policy, not ads for a university or scholarship.”

Facebook staffers also said on the call that the company will be bringing political and issue ad archives to more countries, but didn’t have any specifics to announce on timing or to which countries archives would be rolled out to first.