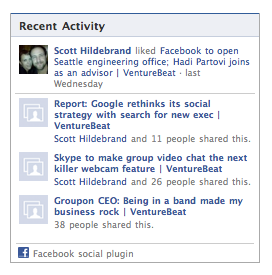 Facebook’s social plug-ins are spreading quickly across the web, and the number of sites hosting them has doubled in the last week and a half to 100,000, according to the company.

The plug-ins, launched at the end of last month, show what a person’s friends have liked on external sites or what content is popular on Facebook. Facebook says the plug-ins are driving additional traffic to partners like The Washington Post and Toronto’s Globe and Mail.

The company says The Post has seen a nearly three-fold jump in traffic coming from Facebook, while other partners like job search engine Simply Hired are seeing double the level of engagement from Facebook users compared to non-Facebook visitors.

The growth of these plug-ins has far outpaced Facebook’s last significant launch, Connect, which is now on 250,000 properties in more than a year’s time. It’s all part of Facebook’s plan to extend its presence across the web and collect more and more data on what its users like.

The social plug-ins are iFrames, which mean every time they appear on a site, it’s as if that property is giving up a tiny bit of its real estate to Facebook. No personal data is shared between the host of the plug-in and Facebook. But it does mean that Facebook will be able to collect data about what sites its users visit, if they’re logged in. The company says it’s focusing on explicit sharing, such as clicking on a “like” button.