Your Facebook Messenger experience may start to change soon. The social networking company said that it will begin testing ads in the chat app with a group of people in Thailand and Australia “in the coming weeks.” But these marketing placements won’t be intrusive — at least Facebook hopes not — because they’ll be limited to just the Messenger home screen. This means as you’re having a conversation with friends, an ad won’t pop up related to your discussion. 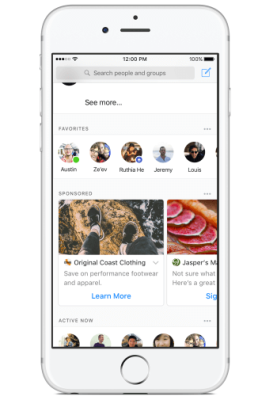 It shouldn’t be surprising that Facebook is beginning to look at ways to further monetize this app that now counts more than 1 billion monthly active users. Facebook Messenger has achieved a critical mass of people, and now it’s time to further build out the next stage of its evolution, the Messenger platform. Ads will be featured in an area of the app below your recent conversations, similar to how Facebook displays birthday notifications and where you can find if a friend is active or not.

Facebook believes its Messenger ads test reflects “a lightweight, relevant, and useful approach to helping people and businesses connect on Messenger.” The company emphasized that those in the test had “complete control” of their experience and can hide or report specific ads through a dropdown menu in the app. Advertisers won’t initiate conversations with users, and any unsolicited chatter will be blocked.

It’s still too soon to know when this capability will be arriving on Messenger to the public — Facebook has only begun testing it. A company spokesperson shared that targeting for ads will be similar to ads on the social network and that it won’t be based on your conversations. Additionally, conversion data from Messenger will not be used in targeting.

This isn’t the first set of ads to have reached Messenger. In April, Facebook revealed that it was testing sponsored ads. Now the company is doubling down to bring more ways for businesses to reach audiences in more areas besides Instagram and Facebook. Could WhatsApp’s time for monetization also be drawing near?

Because of Facebook’s bet on businesses using Messenger as the next medium to communicate with their customers, these ads could provide another link between the chat app and the social network. Based on who you might engage with the most in chat, such as if you talk to a bunch of airlines or use a related chatbot from the likes of KLM, a rival brand (say, United) could target you with an ad to attract you to their business instead.

Updated as of 2:36 p.m. Pacific on Wednesday: Updated with statement from Facebook spokesperson saying ads will not be targeted by conversation.