Something is going very right at the world’s biggest social network. At least according to Wall Street.

After popping 19 percent last night in after-hours trading, Facebook shares are up 25 percent today to over $33, as the stock is flirting with levels not seen since its botched IPO over a year ago, when shares jumped as high as $43. The stock briefly hit $34.90 this morning before subsiding.

The company reported strong revenue and earnings growth yesterday and has shown that it can control costs while still accelerating revenue.

Facebook’s payments revenue jumped 11 percent this year, and it brought in $1.6 billion of advertising revenue, up 61 percent from the year-ago quarter. Interestingly, mobile — not so long ago Facebook’s Achilles heel — accounted for 41 percent of the company’s total ad revenue, and CEO Mark Zuckerberg said that figure would soon increase to over half of Facebook revenue. 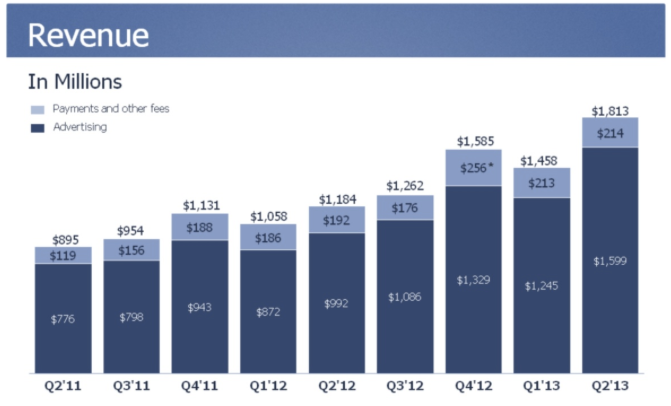 Facebook continues to grow members and usage, with 699 million people using the service on any average day in June, while 1.15 billion people accessed the social network at least once during the month. That’s up 21 percent since last year. As you would expect for a company with 41 percent of its revenue coming from mobile, Facebook said that 819 million Facebook users accessed its services at least once from mobile platforms in June, up 51 percent.

And time spent on the site continues to increase, the company said, to over 20 billion minutes per day.

Interestingly, Facebook also said that teens are increasingly using the site. There’s been some talk of younger users migrating away from Facebook — where parents and teachers connect, after all — to emerging platforms such as Snapchat, but Facebook said that over the past 18 months, the number of teenagers on the site has been “steady or increasing.”