Facebook’s trending topics is getting an update that involves eliminating the human element when it comes to describing why something merits promotion. The company is now relying on its algorithm and programming to display subjects and topics that Facebook thinks you’ll be interested in.

With this move, it’s easy to think that the company is streamlining its efforts and reducing costs. On the other hand, it’s also a response to outrage heaved at it by critics that alleged that Facebook employed systematic political bias against conservative news. After an internal investigation, the company denied any human willingly suppressed content from being shown, but announced that it would end reliance on its Media 1K list, which was a top 10 lists of news outlets to draw stories from. 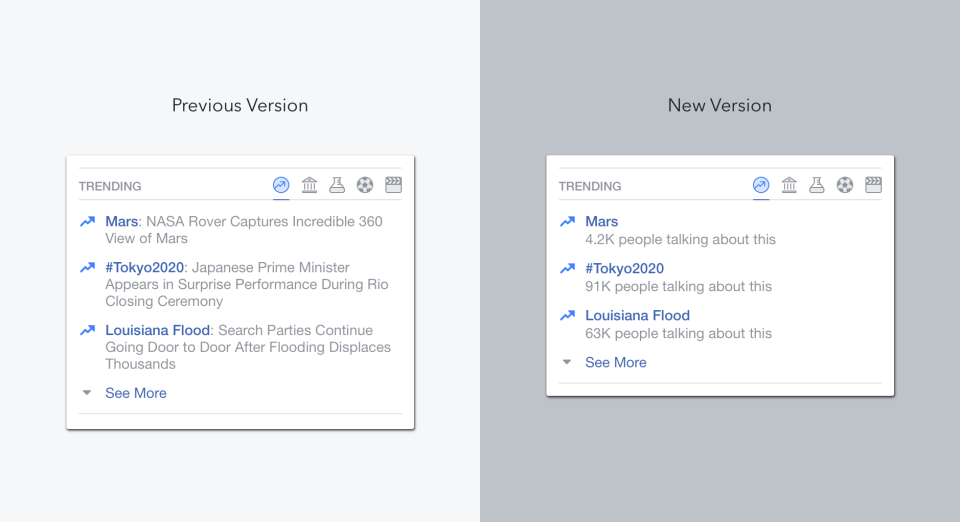 Above: Updated Facebook Trending Topics — before and after versions.

“Making these changes to the product allows our team to make fewer individual decisions about topics. Facebook is a platform for all ideas, and we’re committed to maintaining Trending as a way for people to access a breadth of ideas and commentary about a variety of topics,” the company said in a blog post.

Story descriptions are no longer being shown in trending topics, at least directly. In its place, simplified topics such as #PhelpsFace, NASA, Britney Spears, or Donald Trump will be shown along with the number of people talking about it on Facebook. The company explained that its algorithm aggregates the number of original posts that mention the topic as well as how many shares of posts there are.

Above: Hovering over Facebook trending topics will display more information about the topic.

You can hover on any topic to see more information about it, which will show you a headline and summary of an article, likely pulled from the publisher directly. Search results pages will include news sources covering it, posts discussing it, and automatically selected original news story with an excerpt. All articles and posts shown are based on an algorithm, such as the high volume of mentions and increases in mentions over a short period of time.

While humans are no longer writing the descriptions of stories, Facebook said that it still has people involved in trending topics, such as making sure that topics are tied to current events. However, “these changes mean that we no longer need to do things like write topic descriptions and short story summaries since we’re relying on an algorithm to pull excerpts directly from news stories.”