Facebook recently introduced two consumer-facing products designed to help it bring in more dough. One looks to be a money-making bonanza, while the other seems to have flop written all over it.

Nearly 45 percent of respondents in a survey fielded by analyst firm Sterne Agee said they would consider purchasing and sending physical gifts to friends through the newly released Facebook Gifts product.

Sterne Agee surveyed more than 750 U.S. Facebook members, ages 18 and up, across various age groups and income levels, with a near equal split between men and women. In a phone interview with VentureBeat, firm analyst Arvind Bhatia expressed confidence in the sample as representative of Facebook’s larger adult user base..

“We believe [Gifts] is an area of tremendous opportunity for Facebook,” Bhatia and fellow analyst Brett Strauser concluded in their report on the survey findings. “This will allow Facebook to diversify its revenues away from advertising and should lessen the impact of the shift towards mobile.” 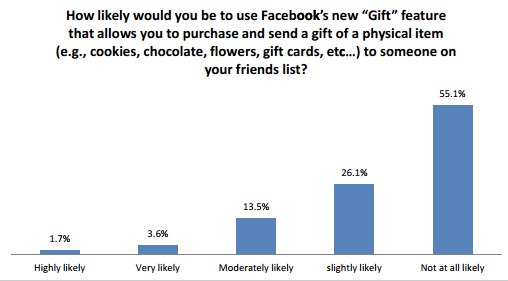 A closer look at the findings shows that a majority of those willing to consider using Facebook Gifts said they were just “slightly likely” to do so. Bhatia believes, because the product is new and not available to all members, that the survey results are encouraging.

Meanwhile, just 16 percent of surveyed Facebook members said they would pay to promote one of their own status updates using the Promoted Posts for People feature, which is still in testing. Worse still, only 1.2 percent of the respondent pool indicated that they would be willing to pay more than $5 for the feature. The pay-to-promote option, which allows regular users to sponsor their own content, costs roughly $7 per status update. 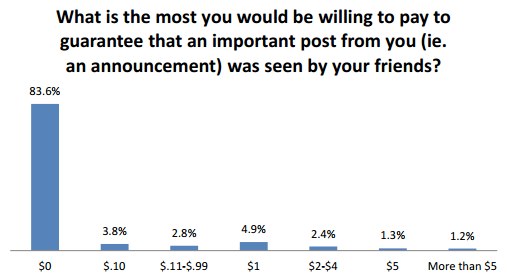 “While we see a significant opportunity for Facebook Pages to promote posts, we view the move into promoted posts for personal profiles as small,” the analysts concluded. “While the margins will be high, we think it’s unlikely for the promoted personal posts to move the needle in the near term.”

Overall, the firm felt very encouraged by the survey results, which also found that Facebook users are indicating equal levels of engagement with the social network compared to their usage six months ago.

Additionally, 77 percent of respondents who indicated that they were Facebook mobile users said they were moderately to extremely satisfied with the mobile experience. The same percentage of people haven’t noticed ads on mobile, which is a sign that the sponsored units are subtle and effective on mobile, the firm concluded.

Bhatia did point me to one troubling finding: 61 percent of respondents said the relevance of Facebook ads was about the same as it was six months ago.

“This is a concern for advertisers,” he said. “They’re advertising on Facebook because they’re hoping to get more targeted ads.”

You can find a copy of the report below.