As Facebook is determined to prove that it can proactively stop election meddling on its platform, the company announced today that it has suspended a group of pages and accounts involved in “coordinated inauthentic behavior.”

In total, it removed 32 pages and accounts from Facebook and Instagram this morning, created between March 2017 and May 2018. The company didn’t say who it believes to be behind the pages and accounts, but say that some of the activity exhibited by the pages is “consistent with what we saw from the [Russian-based Internet Research Agency] IRA before and after the 2016 elections.” And while the company didn’t speculate on what the goals of the suspicious accounts and pages were, some of them were involved in encouraging political protests.

Facebook’s findings have been shared with law enforcement, members of Congress, other technology companies — though the company didn’t say which ones — and a research lab Facebook has been working with, the Atlantic Council’s Digital Forensic Research Lab.

The New York Times first reported that Facebook had been briefing lawmakers on its findings, and that the suspicious activity had been discovered two weeks ago. The Times also cited two people familiar with Facebook’s findings who said that some of the suspicious activity dealt with the #AbolishICE hashtag — a leftist movement that’s been most prominent on Twitter and calls for an end to the U.S. Immigration and Customs Agency — but Facebook didn’t discuss any findings about activity around that hashtag in a blog post addressing its findings.

Facebook said that more than 290,000 accounts followed at least one of the flagged pages — “Aztlan Warriors,” “Black Elevation,” “Mindful Being,” and “Resisters” being the ones with the most followers. 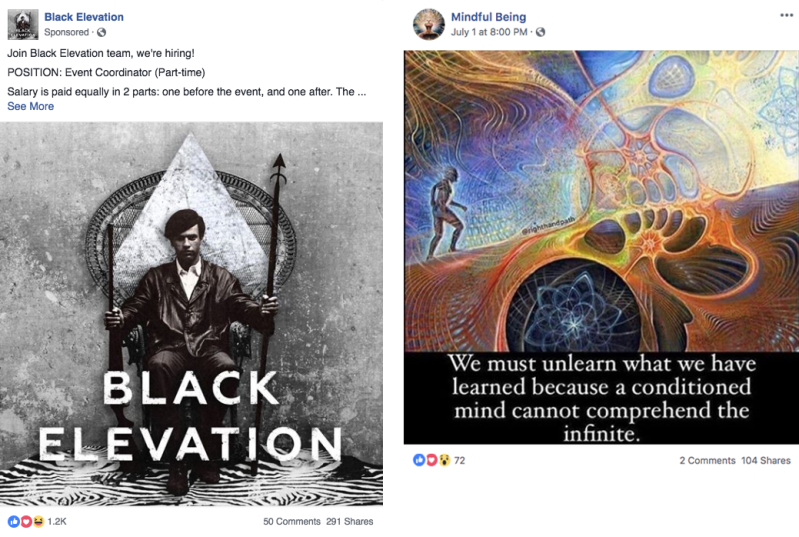 Above: Facebook released the following two posts as examples of the content and ads the suspected pages were running.

Some of the suspicious accounts also tried to organize Facebook events around political protests — which IRA-linked accounts did before and after the 2016 U.S. presidential election. About 30 events were created since May 2017. One of the pages, Resisters, was an admin for an event created to protest an August “Unite the Right” event in Washington, D.C. Facebook said that in addition to Resisters, the five other cohosters of the event were admins with legitimate pages. This afternoon, Facebook is notifying the more than 2,600 users interested in the event of their findings.

Facebook said that the Atlantic Council plans to release a report in the coming weeks with more detail on the Pages, profiles, and accounts disabled today, as well as a report on a Facebook group that it determined was created by Russian government actors and included about 4,000 members. Facebook disabled the group’s admins last year.

Before and after the 2016 U.S. presidential elections, Russia-linked pages and accounts, with the goal of swaying the outcome of the election, published about 80,000 posts that may have been been seen by up to 126 million Americans. Since then, Facebook has increased its partnerships with third-party fact-checkers to stop the spread of misinformation and invested in more technology to proactively catch bad actors who are trying to meddle in elections. For example, the company said that it removed dozens of Facebook accounts impersonating politicians running for office ahead of the Mexican presidential elections on July 1, as well as tens of thousands of “fake likes” purported to be from real political candidates. In a July conference call with reporters, Diego Bassante, a member of Facebook’s Latin American politics and government team, said that “we know there were some areas where we could have done better, such as moving faster against bad actors.”