It’s been mooted in the past many times, but Facebook badly needs a new way for users to express emotions beyond “Likes.” 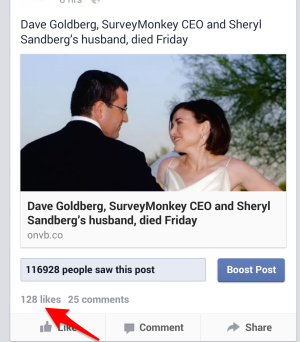 Over the weekend, awful news broke that David Goldberg, Silicon Valley entrepreneur and CEO of SurveyMonkey, had passed away. Waking up to this news in my Facebook News feed on Sunday morning was bad enough, but there was something particularly jarring about the “Likes” in there that hit me more than usual when I see this happen.

Of course I realized that those who had clicked “Like” didn’t actually “like” the news, and it was more of a way of acknowledging their engagement with the article, but still. It just stood out for me more than it usually does, and I’m not quite sure why.

Many have argued the case for a “Dislike” button in the past, but such a feature would likely be abused. People would share positive news and, well, people would click the “Thumbs Down” button for whatever reason. Plus, brands would fear a dislike button like the plague, which wouldn’t be good for Facebook.

Facebook cofounder and CEO Mark Zuckerberg has previously discussed the subject, and has more or less ruled out a Dislike button, for the aforementioned reasons — negative vibes aren’t good for Facebook or anyone who uses it.

“Some people have asked for a Dislike button so they can say something isn’t good, and we’re not going to do that. I don’t think that’s good for the community,” he said during a public Q&A earlier this year. But he did acknowledge that being able to express more sentiments was perhaps on the agenda.

“There are things in people’s lives that are sad, or that or tragic, and people don’t want to Like them,” he explained. “We’ve talked about for a while how can people express a wider range of emotions like surprise.”

Of course, the Facebook interface could become a little cluttered with a bunch of emotion-based buttons thrown into the mix, but it should be easy to implement a system where a post can be customized to allow for different sentiments. So rather than allowing people to “Like” a negative story, they could click a “heart” or something else that indicates sympathy, empathy, or any other kind of positive sentiment.

There has been a flurry of awful events to hit the headlines this year already, and this means people share and discuss such news on Facebook. People can share their distaste for the news in the comments, but what is really needed is a simple button that lets someone convey that they don’t like something — in a positive way.

How such a system is introduced is very much open to debate, but as one of the preeminent platforms for sharing news, Facebook has to cater for more diverse emotion-based feedback.