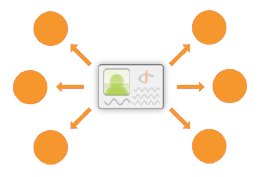 Facebook, the world’s largest social network, has so far asked third-party developers to access its user data strictly through its own proprietary standards. But the company has said it intends, eventually, to make this data more openly accessible, and it’s taking a step in that direction today by announcing it’s joining the OpenID movement.

OpenID lets you sign into a web site using your username from another site. So when somebody goes to a site they’ve never signed into before, and that uses OpenID, they’ll presumably be able to sign in using their Facebook identity. It’s not clear if Facebook will let users sign into Facebook using identities from other sites. For now, Facebook is just announcing that it will support OpenID — no more details on the implementation front for now.

The social network has also joined OpenID’s board of directors and will provide financial support to the industry-backed foundation going forward. Facebook engineering director Mike Schroepfer wrote this about the news in a post on the company’s developer blog:

It is our hope that we can take the success of Facebook Connect and work together with the community to build easy-to-use, safe, open and secure distributed identity frameworks for use across the Web.

As at least one detractor in the industry has pointed out to me, though, this likely means that sites using OpenID also have to use Facebook Connect, the social network’s proprietary method for letting third parties access and display Facebook user data. A source close to Facebook retorted that “actions speak for themselves, and Facebook’s contributions to the successes and adoption of the OpenID protocols should soon illustrate that it’s about more than becoming a provider.”

Many of OpenID’s industry champions let users sign into other sites using their identities (the “providers”), but don’t let users sign into their own sites through another site that uses OpenID. Facebook Connect has up until this point been a one- or zero-click way to get your Facebook identity on another site, while OpenID has required more clicks (where users need to specify which service is the provider, etc.).

Indeed, open standards advocate and OpenID board member Chris Messina reveals the complex politics going on around the standard in this post about the news:

The crux of the issue is that with OpenID, choice is baked in, which is a good thing for the marketplace and ultimately a good thing for users. The problem is how this choice manifests itself in interfaces.

Facebook Connect is simple because there is no choice: you click a button. Of course, that button only works for the growing subset of the web who have Facebook accounts and want to share their Facebook identity with the web site displaying the button, but that’s why their experience trump’s that of OpenID’s. If you take away user choice, everything becomes simple.

But I believe that we can do better than that, and that we arrive at a satisfying user experience for OpenID that doesn’t necessarily have to dispense with choice. And from the sound of our conversation on Friday, and with Facebook’s membership in the OpenID Foundation, I believe that we now have a mandate to confront this challenge head-on, as a top priority.