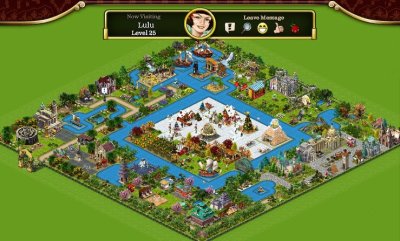 To the dismay of bosses and spouses everywhere, Facebook, by way of third-party social games, offered social networkers a daily distraction they could not go without in 2011. But no game commanded more attention or unrequited love than Disney Playdom’s Gardens of Time.

The hidden object game beat out Electronic Arts’ The Sims Social and Zynga’s Cityville for the title of the most popular game of 2011, Facebook revealed Wednesday.

In Gardens of Time, players sign up for the Time Society, a group of time-traveling detectives whose duty is to explore hidden object scenes of the past without disrupting the flow of history. As players find objects, they earn coins and collect artifacts to personalize their own gardens.

If you missed this garden phenomena, consider yourself one fortunate survivor. The Disney Playdom game is so addictive that it has already served up more than 5 billion hidden object game sessions since its April launch.

And while Zynga, the newly public social game maker that the market is iffy about, didn’t win the top prize, it did get four titles on the top 10 list. Cityville ranked third for the year, Indiana Jones Adventure World nabbed fifth place, Words With Friends followed closely behind it in the sixth spot and Empires & Allies took home an honorable mention as the eighth most popular Facebook game of the year. Farmville, however, is nowhere to be found.

Meanwhile, Facebook appears to be on its way to becoming the gaming console of the future. Not convinced? Consider that more than 25 percent of Facebook gamers play games at least every other day. And chew on this: The average Facebook gamer plays games on over 50 percent of the days they visit the social network, and plays over three different gaming titles each month. Healthy or not, these social media socialites are also serious gamers.

Still curious about how Facebookers are wasting, ahem spending, their time? Here are the social network’s most popular games of the year, broken out by category: