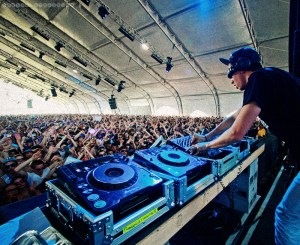 Ruh-roh! Did Facebook just sideswipe up-and-coming music startup Turntable.fm with the release of its “Listen With Friends” feature? Hardly, but follow the headlines and you’ll find yourself swept away by the drama of something akin to a premeditated murder plot.

So what is Listen With Friends, exactly? Two new features from Facebook — simultaneous listening and group chat — added to an already popular music offering that’s been around since September. The social networking company didn’t even make it possible for multiple members to DJ together, which happens to be the flagship feature of Turntable.

Listen With Friends, as I see it, is not so much a cannonball directed at Turntable, as it is an obvious next step for a service that has an on-going, and continually expressed, interest in getting members to share! share! share!

“We’re excited about all social music experiences,” a Facebook representative told VentureBeat. “The new Listen With feature takes what services like Spotify and Rdio launched in September to the next level so you can not only share the music you’re listening to, but listen to it together in real-time.”

Turntable, as a refresher, is the hip New York-based startup that makes web and mobile applications for virtual and social music-listening parties. Members play the role of DJ, and they can start or participate in rooms and switch off choosing tracks — up to five DJs are on deck at any given time. Audiences can join the room to groove along to the beats selected by their peers, and they can rate DJs’ song selections as “lame” or “awesome,” with DJs earning points for their awesome picks.

The overlap is there, but I’d argue that if Facebook did in fact cripple Turntable with the “Listen With Friends” feature that it would be an unintended side effect of a social network evolving with the times. And the very tenet of evolution, that the strong survive and the weak perish, certainly seems to apply here.

Are we really to think that Turntable, and its investors, didn’t anticipate that Facebook would go down this path? It’s not as if these features are coming as a shock to anyone. I don’t know about you, but when Facebook first rolled out the “Listen” feature, my very first thought was: “Interesting, but shouldn’t I be able to listen along with my Facebook friends?”

“I’m flattered Facebook was inspired by Turntable.fm and created a listen together feature,” Turntable co-founder Billy Chasen told VentureBeat. “I look forward to seeing how they interpret what social music means as we seem to have different core philosophies about it, such as the importance of discovering new music from strangers and not just friends.”

Facebook has the means, motive and opportunity to bring social listening to the masses, but Turntable has an edginess about it that Facebook can’t replicate, even if it wanted to. The young service also has the advantage of being so tightly focused on the shared music experience, that it will, more often that not, appeal to musicians, DJs and artists who either want to debut new albums in a quirky way or connect with their fans in a social listening environment. 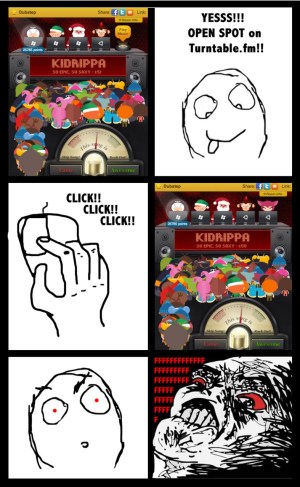 But where Turntable really wins is in appealing to each and every wannabe-DJ’s ego. The whole service is structured around ego-stroking (and bashing). You join a room, get a little comfortable, and soon you’re ready to take the DJ seat. You absolutely can’t go on living without showing off your amazing taste in music. When the anticipated moment comes and you finally do get to be the DJ — which can be an agonizingly long wait in some rooms — you’re crushed if other listeners don’t give you DJ points for your selection. You then spend the next 10 minutes queuing up what you’re sure are the best, most crowd-pleasing songs on the planet. And the cycle continues.

As Brenna Ehrlich, Mashable’s former music reporter and a senior writer at MTV, once said, Turntable is “as addictive as chocolate-covered, deep-fried crack cocaine.”

Here’s a few more things to keep in mind, as pointed out by the astute editorial staff here at VentureBeat: Listen With Friends isn’t all that attractive, it comes with an additional privacy setting and it forces the user to keep Facebook (and Spotify or Rdio) open at all times, which is less than ideal in work environments. And let’s not forget that Facebook is already saturated with features these days.

In essence, the dynamic between Facebook and Turntable is pretty analogous to the dynamic between Facebook and Instagram. Facebook does photo-sharing, but Instagram does it better. As a result, the latter is thriving and has a strong following of passionate hobby and professional photographers who will always favor Instagram over Facebook. After all, not everyone wants to shop at Walmart.

That’s not to say that Turntable is in a cushy position and should ignore what Facebook is up to. Rather, the still fledgling startup needs to double-down on what it does best: ego-boosting features, Steve Aoki-like DJ parties and virtual music festivals.