Your Facebook profile is becoming the first place people come to find out information about you — they may not be looking for your website or on Twitter. As we’re now a mobile-first society, how your profile looks on the device is important. After all, first impressions and all that.

That’s why Facebook is unveiling new features for how profiles look on mobile devices, including motion-enabled avatars, a new layout, and improved controls.

Product managers Aigerim Shorman and Tony Hsieh wrote that on Facebook’s News Feed and profiles, the company has “seen people create and view more videos than ever before.” To address that, they’re testing out a new feature called profile videos. These are short, looping video clips that play when anyone visits your profile. They are up to 7 seconds of footage that you can take using your mobile device, which adds some flair so that your profile doesn’t look too static.

These short, looping video clips are reminiscent of Twitter’s Vine, and also bear some interesting similarities to Apple’s Live Photos (albeit not dealing with avatars). The point here is that companies seem to recognize that motion really helps things stand out more. 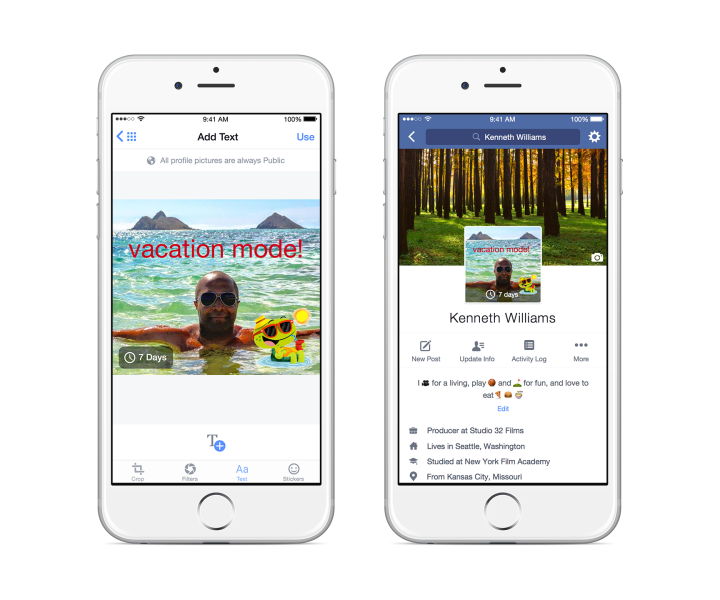 As some people don’t change their profile pictures often because they can’t remember when to update it (I’m guilty of that), Facebook is also getting set to roll out a fix for that. Building off of the Celebrate Pride filter, where more than 26 million people (out of the 1.49 billion monthly active users on the social network) changed their avatars, Facebook is rolling out a temporary version. Now you can commemorate a milestone or event and then not have to worry about it growing stale — it’ll change back to your previous avatar.

Facebook said it’ll be sprucing up the rest of the profile page as well, starting with a refreshed layout. The profile picture and video will now be front-and-center of your profile — no longer off to the left side of the screen — and enlarged. Many of these changes were spotted in July by some users. At the time, a Facebook spokesperson told VentureBeat that the redesign was to “improve the profile layout and better present information about a person.”

A customizable space has also been added to the top of the profile that lets users put whatever they want to help people know them better. Content that can be added include one-line bios and information about your education, work history, and so on. You can also showcase up to five Featured Photos to be displayed at the top of your profile.

Now here’s the catch: Only a small number of iPhone users in the U.K. and California will be seeing these updates right now, but Facebook said it’ll be rolling them out to more people soon.