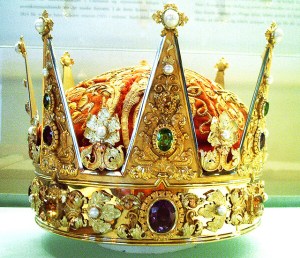 New evidence suggests that Facebook is inching closer and closer to overthrowing Google as the most-visited web brand in the U.S.

Facebook’s unique U.S. visitor count has increased by 29.5 percent since Oct. 2009, according to Nielsen data shared exclusively with VentureBeat.

Compare that to the 5.4 percent increase in U.S. visitors to Google sites in the same two-year period, and you have the makings of a Facebook coming-of-age story that could end with the social network ousting Google as the king of the web.

That juicy climax could still be several years away as both companies battle for attention from the remaining sliver of U.S. Internet users not already using their products (213 million Americans were active online in Nov. 2011, by Nielsen’s calculations). While Facebook may have experienced nearly 30 percent growth in its U.S. audience in two years, the company can’t possibly sustain that type of growth in market penetration. As proof: the year-over-year change of unique U.S. visitors to Facebook slowed to 5.7 percent from Oct. 2010 to Oct. 2011, according to Nielsen.

Still, we decided to do some rudimentary calculations based on Oct. 2010 and Oct. 2011 Nielsen unique visitor data. If unique U.S. visitors to Facebook and Google were to increase at the same rate year-over-year (which is unlikely, we admit) — 5.7 percent and 2.8 percent, respectively — then Facebook would overtake Google as the most-visited web brand by Oct. 2016.

By 2016, will the title of most-visited web brand mean what it means today? Probably not. As consumers increasingly transfer their browsing and social behaviors to mobile devices — IDC research predicts that by 2015 more people in the U.S. will access the web via mobile than via PCs — the most important battleground for both companies will be mobile.

And Facebook may have the edge on mobile. Social media is now the fastest-growing mobile activity, according to recent comScore data, and the social network’s U.S. monthly mobile audience grew to 57 million in August 2011. 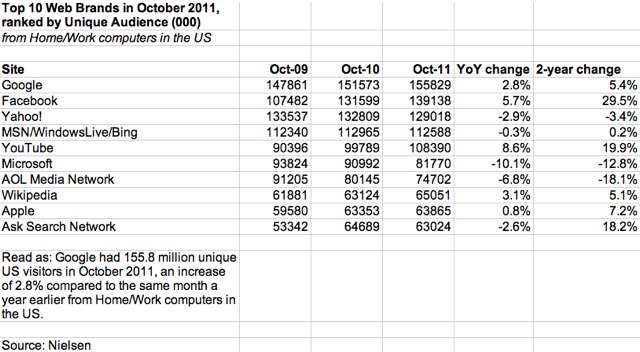