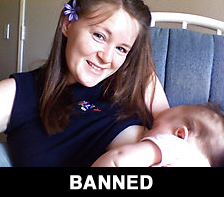 Last Saturday, the group Hey Facebook, breastfeeding is not obscene! got over 11,000 people to participate in an online protest of Facebook’s decision to remove user-uploaded breastfeeding photos. Dubbed the first ever Mothers International Lactation Campaign (M.I.L.C., get it?), protesters posted a profile photo of themselves breastfeeding, along with supporting status messages. Offline, about 30 M.I.L.C members staged a “nurse-in” outside of Facebook’s Palo Alto headquarters.

So much for the saying “Save the drama for your mama.”

The Facebook group is a public plea to convince the social network to allow breastfeeding photos on the site. The more than 80,000-member group was created in June of last year after moms (and dads) scuffled with the company over whether or not some deleted photos violated its terms of use.

Facebook’s Content Code of Conduct, which was last revised in May of 2007, states that users cannot post inappropriate content that is “obscene, pornographic or sexually explicit.” A spokesman for the company says that as long as nipple or areola aren’t visible, nursing photos are fine, The Washington Post reports. The spokesman added that the majority of nursing photos are left alone, and the ones that are yanked from the site are mainly due to user complaints.

I can attest that there are a lot of photos on Facebook that land in the gray area of violating the site’s terms of use policy, with the equivalent of band-aids pasted over nipples and drunk girls who arguably have more of their boobs unintentionally or intentionally exposed than many of these mothers do. While I didn’t write the Facebook policy on obscenity, I’m not sure how the now-deleted photo (above) of the Facebook group’s founder Kelli Roman nursing her baby is considered racier and more sexually explicit than the photo for the Facebook group I love Kim Kardashian’s BOOBS. Roman did get an e-mail warning, apparently, before Facebook cut the cord and disabled her account on Christmas Eve.

The terms of the site also state that users must agree not to upload content “that would otherwise create liability or violate any local, state, national or international law” but that’s impossible to police given how many underage drinking photos flood the site (especially around finals week on college campuses). I guess it’s easier to verify fully exposed breasts than illegal keg stands, even if those fully exposed breasts are legal — 40 states have laws that allow women to breastfeed in any public or private location, 25 of which exempt breastfeeding from public indecency laws. But the laws don’t say anything about the Internet. If it’s legal in public, shouldn’t it be legal on Facebook? Or are these photos too traumatizing for 13-year-olds?