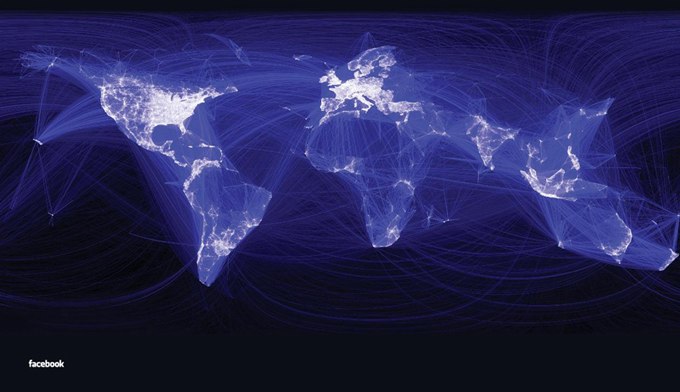 With eight years, $2.2 billion in funding, and 901 million users under its belt, Facebook is set to become a public company. Thanks to data compiled by analytics firm Nielsen, we can revisit some of the more memorable moments of Facebook’s maturation process.

Between 2005 and 2009, for instance, Facebook was still working its way up the social networking food chain. During that period, the company managed to double its U.S. traffic each year, Nielsen found. In January 2009, Facebook surpassed competing social network MySpace to become the top social network in the U.S — and never looked back.

And here’s a fun tidbit you’ve probably forgotten: Facebook surpassed 10 million unique U.S. visitors for the first time in November 2006. Compare that to close to 153 million today — or more than two out of every three active online Americans — and you can see just how far the social network has come.

The company, however, wasn’t able to hit 10 million unique visitors in the UK until April 2008. In France, Spain, and Germany, the journey to 10 million uniques took even longer, but Facebook eventually passed those milestones in January, May, and November 2009, respectively. 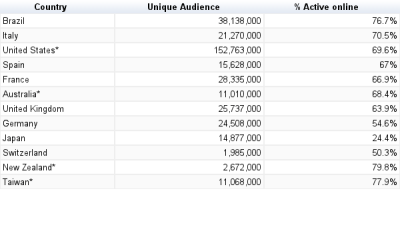 But back to present day, we find that the social network reaches a majority of people active online in many of the countries where it is accessible.

In the U.S. in March, Facebook attracted a total of 152,763,000 unique visitors across work and home computers and mobile browsers. The figure represents reach to 69.6 percent of all adults active online in the month, according to Nielsen’s calculation.

Facebook also has an especially expansive reach in 10 other countries, including Brazil, Italy, the UK, Taiwan, France, and New Zealand. In Brazil, for instance, 76.7 percent of active online adults visited Facebook in March. In New Zealand, Facebook has nearly 80 percent reach to active online adults, and in Italy, the social network touches 70.5 percent of the population, based on Nielsen’s March 2012 data.

We’ve included a table and charts based on Nielsen’s data. Note that in New Zealand, Taiwan, the U.S., and Australia, Nielsen uses a hybrid measurement that incorporates mobile and tablet browser activity to calculate unique audience. In the other countries, expect for Switzerland, which shows measurement from home computers only, calculations reflect Facebook’s unique audience from home and work computers.