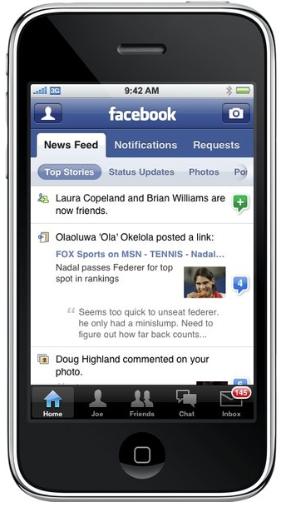 Facebook is planning to launch a new version of its iPhone application in September that will make the app more like the newly-redesigned web site. So, the deeper rationale for the web site redesign, perhaps, was to make it easier to replicate on mobile applications like this one. Meaning that Facebook’s web users will first get used to the web redesign, then realize they can get the same functionality, cleanly, on mobile devices.

Broadly, that would help Facebook continue penetrating markets such as Latin America, where it is increasingly popular — and where mobile data services are becoming more popular, too. Meanwhile, getting existing, web-oriented users onto mobile could also be a strategic play in case Facebook ever decides to introduce location-based services that access information it has about users, their friends and preferences.

The app’s news feeds of information, which already show you what your friends are up to, will contain the same information as the redesigned site, including posted links, photos, and other items. See top screenshot. Right now, you can only see status updates and mobile photo uploads. This is in line with Facebook’s plan to start making more money off of news feeds through letting advertisers pay to have their ads show up more often, per an interview by All Facebook with Facebook’s “director of monetization,” Tim Kendall:

An example would be purchasing a ticket to a concert. Usually, a small subset of your friends would receive a notification of this action [in their news feeds], however, in the future Cheryl Crow [sic] or Ticketmaster could pay for this to be distributed to your full friend group. 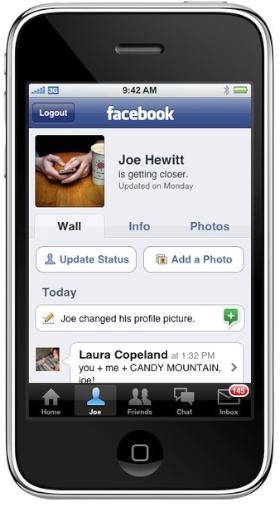 Also forthcoming: changes to notifications, such as invites to third-party Facebook applications. You’ll be able to get notifications in the app’s “home tab.” New notifications will arrive in real-time, the company says, whenever the app is running. It will also make use of Apple’s forthcoming “push” feature, so you can get Facebook notifications on your phone even if the app isn’t running. However, the notifications feature isn’t expected to be included until the next version after 2.0.

Facebook will also add the tabbed features on personal profile pages to reflect the redesign.

Other features that will be added included a way to search for, request or approve new friends from within the app (you have to do that on the site, currently). You’ll also be able to view your full Facebook message box within the application, as opposed to the most recent 30 messages that you’re currently restricted to viewing. This will be useful for the time you’re rushing to meet someone, then realize the only place you have their address is in the Facebook message they sent you weeks ago. Uh, not that something like that has ever happened to me.

For VentureBeat readers who hate all the buzz around Facebook and the iPhone — and so certainly this article — see you in the comment section, below.