You’ll be able to record 15-second clips (there’s a 3-second minimum), and yes, you can filter, filter, filter to your hipster heart’s content. There are even 13 brand-new filters specifically created for video.

Interestingly, Instagram video can also correct camera shake with a feature called “cinema” to provide stabilization. It sounds super minor, but the end effect is pretty amazing. Your whole boring life will look like it was shot by a pro with a dolly.

You can also select which frame gets displayed in the feed, and you can add captions and locations. Videos will upload in the background and play directly from the Instagram home feed without looping. Videos are designated by a small video icon in the corner.

The new hotness is available immediately for all users.

This big idea was the work of a small team, company reps told us leading up to today’s announcement. Turns out, that “little team” was Instagram. Today founder Kevin Systrom announced that Instagram’s community has grown to 130 million users.

“When I think about what Instagram is, I think about moments … at our core, visual imagery is everything,” said Systrom. “Our mission is to capture and share the world’s moments, and we live that every single day.”

Saying that video was complex, Systrom also explained that in order to maintain the product’s simplicity, the Instagram team focused first on photos. For video, he said users should expect Instagram video to be as simple, fast, beautiful, and social as Instagram photos. In other words, don’t expect video ads or a complex video editor anytime soon.

“There’s a natural business opportunity there … but we didn’t design it with advertising in mind,” Systrom said.

For the first version of the app, you’ll only be able to record videos directly from Instagram. Later, you might be able to import video clips from your camera, Systrom said. 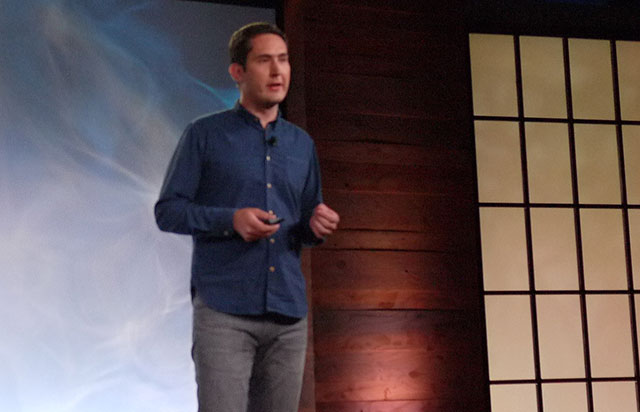 The founder also noted that the videos belong to the users and will not be used in any advertising or commercial content. Video content will be monitored and reviewed for inappropriate content just as it is on Facebook.

Right now, 200 million people use Facebook only on mobile devices, never touching the Facebook.com site on a desktop — hence the company’s strong focus on mobile with separate apps for messaging, photos, and Pages.

As for mobile video, analysts at eMarketer estimate about 63.7 million people in the U.S. regularly watched video on their phones in 2012, and the firm anticipates that number will grow to 74.4 million this year. More than a third of people who watch videos online in the U.S. did so on their mobile phones in 2012.

Some of the other big ideas to come from the social-network company lately include hashtags, Graph Search, and the long-awaited Facebook phone in the form of Facebook Home.

As of this writing, Facebook stock is trading around $24.

In the company’s most recent earnings call, it posted $1.46 billion in revenue for the first three months of 2013, with the vast majority of that sum coming from ads.