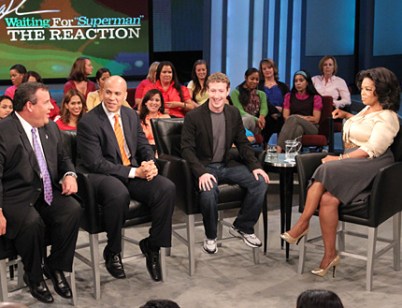 Zuckerberg officially announced the foundation, which will go towards helping Newark’s troubled schools, this morning in a blog post. Mayor Booker, who has gained notoriety for his efforts to improve Newark, is currently working towards developing and executing a comprehensive education plan for the city’s public schools — which will be “based on clear standards and metrics that reward excellence in teaching, school leadership and student achievement.”

Zuckerberg, who was recently ranked wealthier than Steve Jobs by Forbes, will be offering over $100 million in his own Facebook stock for the foundation. “I believe in the Mayor and his vision, and that’s why I want to help them succeed,” he wrote.

While Newark schools could certainly use the money, the cynic in me also sees Zuckerberg’s surprise philanthropy as a way to counteract his negative portrayal in the upcoming film, “The Social Network.” In a conference call today, Zuckerberg mentioned that he originally wanted to make the donation anonymously, but Mayor Booker and Governor Christie begged him not to, Business Insider reports.

Twitter co-founder Jack Dorsey is also getting involved by donating the services of his mobile payment startup Square, according to Forbes. Since Zuckerberg’s donation is a matching grant, Mayor Booker and Dorsey are also encouraging people to donate through Partnership for Education in Newark to reach another $100 million. Thus far, they’ve raised $7,280 through Square — $5,000 of which came from Dorsey.

Watch the announcement below. You can also view it on Oprah’s website.

Via The Next Web and Cindy W on Vimeo