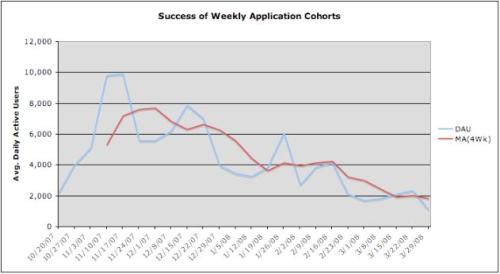 The number of posts, signups, comment threads, active users, and highly active users on Facebook’s official developers’ forum have all fallen by between 25-50 percent from January to April, according to a detailed report put together by prominent Facebook developer Jesse Farmer. So has the usage of those applications. The graph above shows the number of users that a given group of apps gains after launching — the rate of user gain has been dropping with each consecutive group of aps.

Developers are expanding to other social network platforms, Facebook app companies are consolidating and Facebook itself is sending signals to developers that it wants to “regain control over some, if not all” aspects of application development, the report maintains.

Facebook has decreased its direct participation in the developer community, Farmer points out. And its application policies increasingly restrict how applications can do things like message users, something that has been happening since the platform launched, but that has grown more restrictive in recent months. Proposed profile interface changes would also give users decreased application access.

Competition within the Facebook developer community has also led to mergers and acquisitions among the largest developers, especially deals done by social gaming sites Zynga and Social Gaming Network Among other things, the leading application companies, which include Slide, Rockyou, iLike, and Flixster are able to use their sheer number of active users to advertise new applications and new features. Consolidated, powerful companies kill the little guys on Facebook, just like what happens in the corporate world. 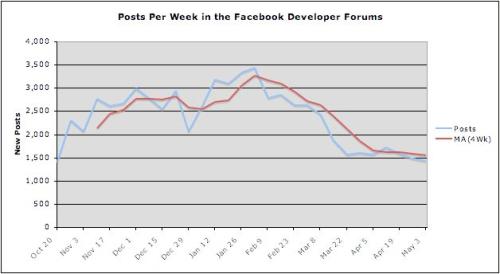 At the same time, platforms on rival social networks including MySpace, hi5, Friendster and Bebo have been attracting developers. Even the leading Facebook app companies on Facebook have been looking at other social network platforms to expand, and they’ve typically been given early access to beta platforms over the course of the past year, as those platforms have launched. In some sense, then, the promise of the Open Social standard — that everyone but Facebook is trying to make itself compliant with — may be coming true. Open Social is a set of standards that could one day let application developers create a single application that can be implemented across any Open Social “container” social network. It’s all still a work in progress, but the key thing is that Facebook mobilized its largest competitors to emulate it, to compete through offering their own developer platforms. So the competition that Facebook inspired is now having an effect.

Facebook’s platform has the network effect going for it of having been the first and still the largest. But the company will have to decide how badly it wants those developers. If Farmer is correct, Facebook’s treatment of developers suggest much larger issues for the entire concept of social network platforms. As developers have long recognized, it’s never been totally clear what Facebook would or wouldn’t build itself. How will MySpace and the others behave towards developers now?

And so what is an application developer or company supposed to do? “It’s better to branch out into other social networks or to piggy-back on Facebook as a means to establish your own, more independent social network,” he says. “This is what the top companies like Slide, RockYou, Zynga, and SGN are doing, and what many of the independent Facebook developers I’ve talked with want to do.”