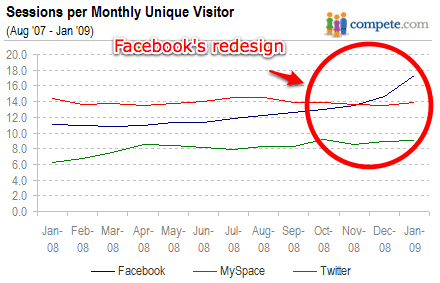 The average U.S. social network user apparently wants to read feeds of photos, links, status updates, videos and comments on Facebook, according to the latest statistics from Compete. The firm’s newly-released study of U.S. web traffic to social networks in January is the latest vindication for the feed-focused redesign that Facebook finished rolling out last fall. The average user had 11 sessions on Facebook when the company started rolling out the redesign last summer, but that number has increased to 17 as of January, Compete shows. There was also an uptick in the number of minutes per session on the site U.S. Recent company data released by Facebook itself points to similar growth. Rival MySpace introduced feeds last year, but not in key areas like profile pages, and it has hovered around 14 sessions in recent months, the study says..

The redesign’s ongoing success shows how Facebook may continue to out-compete every other social web service — including MySpace and Twitter — going forward, at least for many users. A scenario is playing out that shows a segmented U.S. social network population, dominated by a few distinct web services. Facebook is where most people tend to share information with friends during and after college, and it’s growing fastest in older demographics. MySpace, meanwhile, seems to be holding constant targeting teen and 20-something users who are interested its content-heavy features in music and video (although others like MyYearbook are popular with teens). Both Facebook and MySpace continue to dwarf rivals in the U.S., if Compete’s numbers are accurate: Facebook had 65.5 million unique visitors and 1.2 billion visits while MySpace had 58.5 million unique visitors and 800 million visits. Facebook self-reports that it has more than 150 million unique users per month, and it is growing fast — it doesn’t disclose how many are in the U.S (but one calculations puts it at more than 45 million). MySpace generally refers to its comScore traffic numbers, which show a slowly-growing 76 million or so users in the U.S. and more than 120 million around the world.

The increase in site usage, as shown by the study, is also key to Facebook’s revenue plans — which are currently focused on placing relevant ads within and associated with feeds. The more often Facebook gets people coming back to its site to do things like read their news feeds, the more it can serve ads. Of course, what’s not yet clear is how much money Facebook, MySpace and others may one day make through any form of social networking ad. Regardless, retaining if not growing traffic is a requirement if they are ever to make billions as advertising dollars follow users from traditional media to the web.

Which is brings us to micro-messaging service Twitter, which kind of competes with status update features on Facebook and other social networks. Twitter averaged nine sessions per user last month, with slightly less than six million unique visitors and 54 million visits. These numbers are likely quite low, because most Twitter traffic happens on third-party sites. 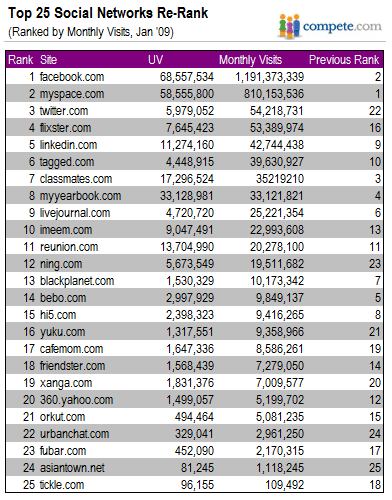 So what’s special about Twitter? In contrast to Facebook, it is only status messages, but often wrapped together with links to articles, photos and videos. More importantly, it seems to be principally used to reach as many people as possible, or “the man on the pulpit” as investor-blogger Fred Wilson described it this weekend. What we don’t know is how much bigger Twitter could get. The maxim of Silicon Valley is that technology becomes more open as it matures, and so social networking and aggregation will become more open. Twitter allows third parties to access its users messages (or “tweets”) through its application programming interface. This means other sites can aggregate tweets from Twitter and post new tweets back to Twitter. Hundreds of third-party services are emerging, whether tools for sorting through tweets by group in a desktop application (like Tweetdeck) or organizing tweets by topic (like Stocktwits for stocks).

Facebook, on the other hand, is considered to be “too closed” in how it lets developers (and users) access and distribute information that users create on its site. On Friday, Facebook moved to make itself more open, by giving developers new ways to post to and get information from its news feeds — information like status messages, links to articles, videos, etc. This means developers might develop aggregator tools for things like status updates, one day, like what is already emerging for Twitter.

Not everyone is going to use Facebook, but many more are than are using any other service. And Facebook is pushing hard to provide the right set of services in one slick package, in an open way. In some sense, its combination of friends connections, personal info, networks, photos, comments, status updates, etc. are like what Apple did in taking existing hardware features like a visual interface, keyboard and mouse. Apple popularized the idea of a personal computer; Facebook has been popularizing the concept of real-life social networking, built around feeds.

Apple lost ground to rivals that created more open operating systems. Facebook is aggressively moving to make itself more open, before Twitter and its third parties start getting discovered by — and making more sense to — the mainstream social networking population.