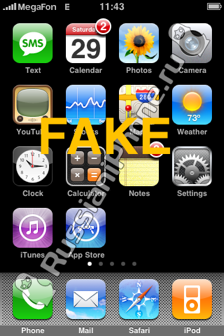 A Russian iPhone blog caused a bit of a stir today when it posted an image it claimed was of the first beta of the 2.2.1 firmware for the iPhone (2.2 was just released last week). The image and report raised eyebrows at quite a few Apple blogs when the author claimed 2.2.1 would finally deliver Push Notification support. The image and report have now been confirmed as fakes, but the question remains: Where is Push Notification?

The Push Notification system is the long-awaited method by which Apple hopes to appease users demanding that third-party applications be allowed to run in the background of their iPhones. It will apparently use Apple’s servers to ping users’ iPhones when an application that a user doesn’t have open wishes to notify them of something.

While Apple chief executive Steve Jobs first talked about the feature when he unveiled the iPhone 3G at WWDC this past summer, saying it would be available by September, Apple has had to push it back. It’s reported that Jobs himself even sent out messages to users apologizing for the delay and explaining that Apple wanted to get the feature “100% right the first time.” (Which was an apparent dig at Apple’s chaotic MobileMe launch.)

I recently asked some Apple representatives when the feature would be ready, but got the expected canned answer that they were working on it and wanted to make sure it was ready for mass use before launch.

I would be surprised if Push Notification wasn’t unveiled (or at the very least talked about) at MacWorld coming up in January. The lack of any sort of background system for third party apps on the iPhone is really hurting the potential for things like location-based services and instant messaging clients.