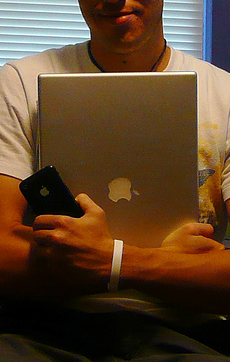 Apple and Google are two companies that immediately come to mind when the word “fanboy” is thrown out there. A fanboy is someone with a seemingly unquestionable loyalty to a brand. In non-fanboys, this behavior can instill animosity as they question the devoted beliefs, but the real question should be: Why do fanboys tend to hover around these certain brands?

The answer may lie in customer satisfaction, if the new American Customer Satisfaction Index (ACSI) report out today from the University of Michigan is any indication.

Google was the number one brand among portals and search engines in terms of customer satisfaction, according to the index. It received a score of 86 out of 100, making it one of the highest rated service company in all of the ACSI. It rose 10 percent in the past year.

Another report out today by StrategyAnalytics shows that Google was the only major company that went against the downward trend in revenue growth for digital media companies during the last quarter. While the industry as a whole saw growth drop to 0.8 percent from 3.3 percent last quarter, Google actually rose 3.5 percent quarter-on-quarter.

Meanwhile, Apple took the top brand in the personal computer category for the fifth straight year, as Tom Krazit of CNET notes. The company bucked the downward trend of the rest of the industry to rise to a score of 85, a new all-time high for the category.

“It’s hard not to be impressed with Apple,” Prof. Fornell says in the report. “This is product extension at its best where the new products, iPod and iPhone, are helping bring new customers to existing computer products. The fact that Apple is not dependent on the Windows Vista operating system hasn’t hurt either.”

This report comes at a time when a couple prominent bloggers, Mike Arrington and Om Malik, have made it clear that they are unhappy with their Apple products. It’ll be interesting to see if the MobileMe and iPhone 3G problems weigh on Apple’s high score, but don’t be shocked if Apple takes the top spot for the sixth straight year. After all, Apple now holds a commanding 10 point lead over number two Dell.