If trends in tech and business continue, the desktop will soon become completely irrelevant to an Internet company’s bottom line — as irrelevant as mobile ads were back in 2010.

Like LinkedIn, Facebook has put a huge amount of focus onto its mobile apps, ads, features, performance, and platforms.

And that focus is paying off, with mobile-derived revenues soaring and quickly accounting for more cash than ads on any other platform.

But here’s the truly interesting part: In this time last year, just 14 percent of all Facebook’s ad revenue came from mobile. By last quarter, that number had skyrocketed to 41 percent.

With the social network’s monthly active userbase up 45 percent year over year, ad money from mobile added up to around 49 percent of all ad revenue ($1.8 billion) from this quarter.

That means Facebook just made $880 million from mobile ads alone in the last three months.

Zoom in on mobile

When you look at Facebook’s place in the wider ecosystem of web companies, the social network’s take seems rather small: a 5 percent stake of global online ad revenues, according to eMarketer. (And of course, Google still dominates the lion’s share of the market, with a 38 percent piece of the pie.)

But when you only look at mobile ad spend, Facebook’s take shoots up to nearly 16 percent in 2013. More impressive than the total market share is the growth; this time last year, Facebook claimed just five percent of mobile ad spend.

Here’s a look at Facebook’s percentage of revenue that comes from mobile ads, starting with this time one year ago: 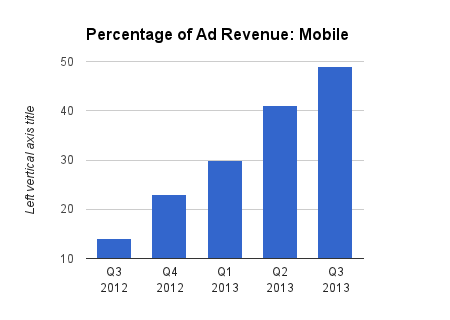 ”We have reached new milestones on mobile. … It’s a pretty incredible sign of how Facebook has evolved over the past year.”

Google doesn’t currently break out mobile earnings in its quarterly reports, but we do know that its mobile ad prices are dropping. And speaking subjectively, Facebook has taken its time in crafting mobile ad experiences that are holistically consistent with the rest of Facebook’s mobile apps, e.g. Sponsored Stories. Google, on the other hand, has stuck with its tried-and-true text ads, which many mobile users find intrusive.

Taking Google as the company to beat, Facebook is quickly gaining ground in mobile, while the majority of Google’s income by far comes from desktop ads — display and search.

And gaining ground in mobile equates to preparing for a long and robust financial future.

As has been trumpeted far and wide, Facebook’s stock price has been the comeback story of the year. Here’s a look at its performance over the third quarter of 2013:

Facebook is also a standout stock pick when compared by percentage growth to other household-name tech companies and some of its fiercest competitors.