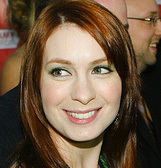 Poole and Day were both keynote speakers at the huge Austin tech event. Day’s comments were just an aside in a longer talk about The Guild (the Web TV show that she writes and stars in), but I was surprised to see such visible pro-anonymity sentiment at SXSW, an event that I consider the capital of online oversharing. This is where an early adopter audience fueled the success of social networking services like Twitter and Foursquare, and where many social startups (including a number that tie into Facebook) are hoping to get a boost this year.

Poole’s comments were less surprising, since the 4chan image board is well-known for its anonymous community. Facebook CEO Mark Zuckerberg has argued that encouraging the use of a single, real identity online leads to greater authenticity, but Poole countered that anonymity gives users the freedom to be more unfiltered and more willing to experiment.

Day clearly embraces social networking services — she has nearly 2 million followers on Twitter, and she said she loves to join new social apps so she can claim the “felicia” username before anyone else. She also acknowledged that anonymity can encourage some unpleasant, trollish behavior. Still, she said, anonymity has an important role to play online, because it frees people from the worry of being judged personally.

“A lot of us are prevented from doing things because of failure and being shamed,” she said.

And while Day didn’t refer to Facebook explicitly, it was clearly one of the sites she had in mind when she warned against “putting all our eggs in one basket” and trusting one company with our online identity — especially if that company wants to “wall us off” into one site and then market to us using our social data.