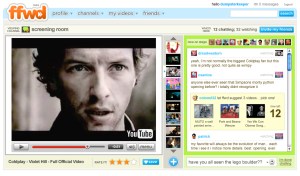 Five years from now, Patrick Koppula figured it would be impossible to find any useful videos on the web, unless something changed.

So he started a company, ffwd, to do that something. It is a new web site that provides tools to help viewers navigate through web video more easily. In doing so, Koppula said in an interview that his company can help improve engagement and audience size for everyone in video entertainment.

The San Francisco company lets viewers create their own personalized channels which can be adapted on the fly and which can index the relationships between self-organized video channels.

“We build an index for the relationship and content of channels, instead of for videos,” he said.

You can build your own personal channel by adding a video to your channel. ffwd will then look for the relationships between that video and others on the web. It can then feed you more videos. You can also mold your channel by checking off a list of preferences such as keywords or things your friends share. You can, for instance, integrate your preferences on Facebook into ffwd.

“We can automatically use that information to enhance your personal video channel,” Koppula said. “It requires no editors.”

With ffwd, Koppula said you can just lean back and see what’s on, rather than get frustrated searching through a lot of videos. Koppula was the co-founder of iLike and enjoys playing in a cover band, Bottoms Up, on the side.

The company raised a first round of financing from Draper Fisher Jurvetson in 2007. Andreas Stavropoulos from Draper sits on the board. Today, the company is kicking off its second round of fundraising and Koppula will speak at the Under the Radar conference in Mountain View.

Koppula said the company is currently building strategic relationships with video content sources, social media vanguards and consumer electronics brands. Koppula says, for instance, that the ffwd interface can be converted into a WiiWare application for the Nintendo Wii. That means users could, if the application is approved by Nintendo, downloaded the application to a Wii game console to watch their own personal channel on the TV through the Wii. 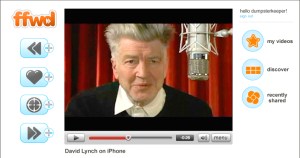 Koppula said there are other ways that the company can also bring your own personal channel to other devices and screens in your home.

“The application lives in the server cloud,” he said. “You can build interfaces that take advantage of our unique navigational capability.”

A public beta will start this summer.