Apple is set to announce its first quarter earnings shortly. Expectations are mixed, but there’s something that should probably be brought up once again for those who don’t follow Apple’s financial details closely: the difference between GAAP and Non-GAAP financial measures.

GAAP or Generally Accepted Accounting Principles, are the guidelines for financial accounting in the United States. In the fiscal year 2007, Apple started selling the iPhone and the Apple TV, two products it wanted to provide free software updates for over their usual life spans (24 months). Because of this, the GAAP requires that Apple use subscription-based accounting for these two products — which means that almost all revenue and cost of goods are deferred over the life of the product — again 24 months. Because of this, Apple’s numbers can look weaker than they actually are.

Some people, like Andy Zaky, a blogger who writes for sites like Seeking Alpha, thinks this move was a big mistake on Apple’s part and has helped drive the company’s stock price from its highs in the $200-a-share range, down to yesterday’s two-year low, $78.20 a share. It very well may be a mistake for Apple to use this subscription-based accounting to save customers $9.99 in software update costs, but that’s why Apple also supplies Non-GAAP financial details now in its earnings reports. For a look at the health of the company in the present day, those might be the smarter numbers to look at.

And some, like Zaky, would argue that if Wall Street had looked at those number last quarter, there’s no way Apple’s stock price would be as low as it is right now. Because while Apple’s Q4 2008 numbers were impressive, it’s Non-GAAP Q4 numbers were “truly stunning,” as Apple’s chief executive said in a rare appearance on the Q4 earnings call. Non-GAAP revenue was some 48 percent higher than the reported revenue, and adjusted income was 115 percent higher!

Below find multiple analysts expectations for both the GAAP and Non-GAAP numbers compliments of AppleInsider. At the top of the GAAP list are Apple’s own estimates, which are always low. 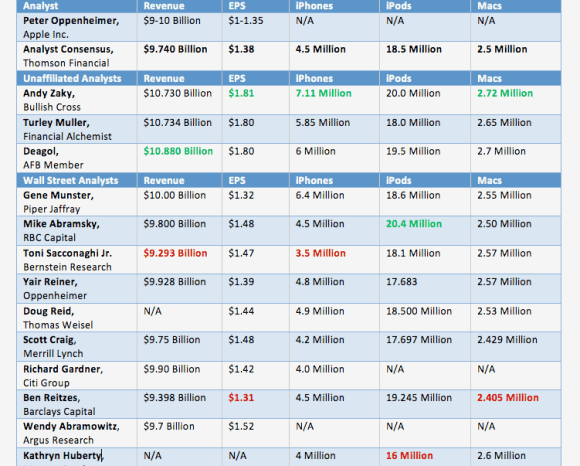