I wasn’t surprised that founder and chief executive Kevin O’Connor found a big-name backer for his Santa Barbara, Calif.-based startup — after all, he sold his online ad company DoubleClick to Google for $3.1 billion. But the fact that the money came from Kleiner’s fund for social networking startups was a bit surprising. So when I got on the phone with Connor this morning, I asked: What makes FindTheBest social?

“It’s an amorphous term,” O’Connor acknowledged. But he said user involvement was always a key part of his plans. FindTheBest employs researchers to build the charts (which it calls “comparison apps”), but O’Connor said those researchers can’t be 100 percent comprehensive on their own: “It’s absolutely essential that businesses and consumers come and add things.”

FindTheBest has already added editing features, and people are using them, but the company hasn’t really promoted that part of the site yet. Encouraging that involvement will be “the next big push,” O’Connor said.

He added that FindTheBest might also incorporate data from social networks like Facebook. For example, when you’re looking at the private school comparison chart, besides seeing school size, location, and student-teacher ratio, it would also be helpful to see if there are schools that your friends like or dislike.

“We don’t have it all figured out yet, but we’re definitely excited about the possibilities,” O’Connor said.

When I explored FindTheBest a couple of months ago, I was impressed by the quality of information, especially compared to Google’s efforts to build similar charts with its Google Squared product. There are now 440 comparison apps on the site, and O’Connor said his goal is to reach 700 or 800 in the next year.

The size of the funding was not disclosed. Kleiner partner Randy Komisar will join FindTheBest’s board of directors. 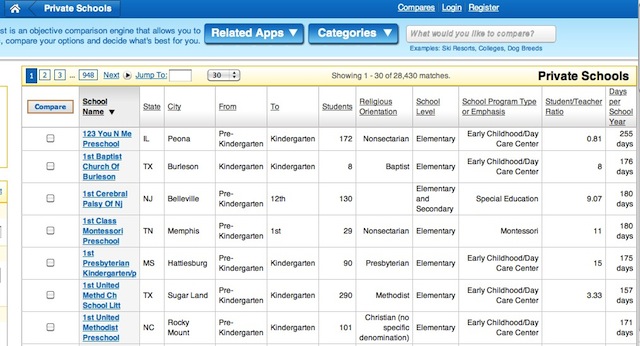