Despite the hype they get, location-based services have yet to catch on in the mainstream. The problem so far is that most of the social networks that use location are relatively small — at least, compared to something like Facebook, which is nearing 200 million users. But a new Facebook app from Yahoo will remedy this situation, at least somewhat: Friends on Fire.

The app was built by Yahoo’s Fire Eagle team. Fire Eagle is the service Yahoo launched last year to help other services and users manage social location data. The main idea is that you update your location through Fire Eagle (which you can do a number of ways: GPS, Wi-Fi triangulation, etc.), then Yahoo sends the information out to the networks you belong to that work with Fire Eagle.

Friends on Fire has been beta testing since December, but starting today, it’s open to the public. The application features a large Yahoo map with pushpins for the locations of you and your friends. The social element comes in when you send a “Signal” out, which is basically a Twitter-length message (140 characters) that gets displayed next to your pushpin on the map, and in the river of friend updates. Obviously, these updates can also be featured in the main Facebook News Feed as well. 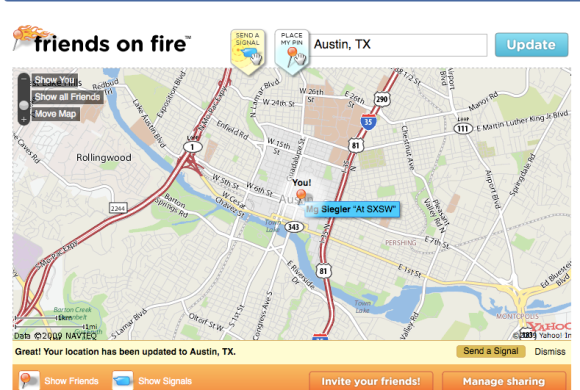 While Friends on Fire’s integration with Facebook both works and looks nice, it still probably doesn’t have enough oomph to take location updates mainstream. The big problem remains that this is an app that will primarily be used on the desktop. And while the newer versions of Firefox allow you to update your location (and Fire Eagle just released a new Firefox add-on), a lot of people either don’t realize that or aren’t accustomed to using it.

An application like this would work much better on a mobile phone. That’s one of the reasons that everyone is sure Facebook will eventually integrate location as a core part of its service as mobile becomes increasingly important. There are plenty of mobile applications that can update Fire Eagle, but Friends on Fire will not work on the Facebook iPhone app for example. So it’s not as simple as if it were all contained in one mobile app.

That’s important, because a lot of people are still freaked out by the idea of sharing their location. For proof, just read some of the responses to Google’s Latitude service. But there are benefits to sharing location data as well, like seredipitous meetups, as the man behind Fire Eagle, Yahoo’s Tom Coates, notes in his post.