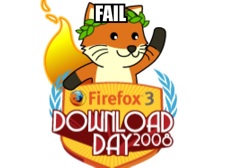 It is both annoying and laughable when a company massively hypes its own launch, only to result in broken links and 404 pages. As Stinger taught Maverick in Top Gun, you shouldn’t let your ego write checks that your body can’t cash. Mozilla apparently never learned from that message, and the launch of Firefox 3 has badly stumbled out of the gate.

Mozilla’s failure is actually worse than most in a couple regards. First, it is trying to set the world record for downloads of a piece of software in a day. A failure to launch cannot be good for such a goal. And second, to help achieve this record, it decided to make it so that everyone in the world download the software at the exactly same time.

Mozilla had to know its servers would get slammed around 10 AM PST (the start time), hell, it begged for it to happen. In the blogosphere, we have a word for this: FAIL.

Mozilla put a lofty 5 million number out there as a goal for downloads today. Right now it’d be happy with one.

update: The direct download links are now working. Of course, this really won’t help achieving the record as most people will have no idea how to download the software without a Mozilla webpage directing them to the link. We’ll do our part and put the links here.

Warning: These will start auto-downloading Firefox 3:

update 2: The main Firefox download page now appears to be working — after some truly weird redirects.

The Spreadfirefox world record download page is still down.

You’ll also notice that in the picture on the right, even thought the graphic is for Firefox 3, the version number is still 2. (Thanks Zach Landes)

update 3: It looks like Mozilla hasn’t started the counters yet for the downloads as it is overwhelmed. As soon as the site goes live is when the counting will begin. In the old days we called that “cheating.”