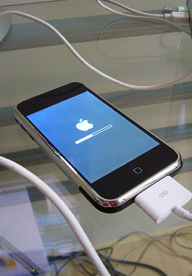 We’re three days away from Steve Jobs’ keynote address at Apple’s Worldwide Developers Conference (WWDC), where he is expected to announce the 3G iPhone. As such, we can expect meatier rumors and actual leaks to start coming in. The first such leak may be the device’s firmware, according to Engadget.

Based on the specs it looks like the device will in fact be 3G compatible and have GPS. While neither of these are surprising, it’s good to see the GPS component nailed down as some rumors we’ve heard floating out of Europe were trying to suggest the new iPhone would still lack GPS support. If this leak is correct, the 3G iPhone will use assisted GPS, or A-GPS, which is faster and more accurate that traditional GPS, but some claim still has issues with its capabilities indoors.

I’m of the belief that location-based applications could be the next field to explode thanks to this new location-aware iPhone.

Also of note is the tri-band UMTS/HSDPA transceiver, which should make the new iPhone compatible with just about every 3G network in the world. This is good since Apple seems to be expanding the iPhone to every country in the world at a rapid pace.

The 3G chip is also the SGOLD3 variety which means it will support download speeds of up to 7.2 Mbps, or twice as fast as current 3G networks. This seems in line with the recent word that AT&T was upgrading its 3G network prior to the new iPhone’s launch. Still, we probably shouldn’t expect speeds anywhere near that for some time.

It’s good to finally see some actual chip names and numbers in the mix of all the vague rumors. Check out Engadget for all the details.