Apple has hit another major milestone in iTunes sales: 5 billion songs sold. It’s now the number one music retailer in the U.S. and it continues to hit these billion song plateaus faster and faster.

But there’s a problem. It’s no longer the best online music store.

I have not bought a piece of music from iTunes in several months now. Why? Because I have been able to find every song and album I want for a cheaper price, completely DRM-free and at a higher bit-rate at Amazon’s digital music store, AmazonMP3.

In nearly every regard AmazonMP3 is simply superior now. is In fact, I give Apple the edge in one category: ease of use. That’s a big one, but is it enough to hold on to the top spot going forward? At some point you’d think the public at large will wake up to the price discrepancy alone.

Not only are Amazon’s regular prices better across the board, it has sales that blow iTunes out of the water as well. Take the recent launch of Coldplay’s new Viva La Vida album as an example. Not only was the album itself a dollar cheaper on Amazon, but in the day surround the launch, AmazonMP3 rotated selling all of Coldplay’s previous albums for $1.99.

It also now has a promotion called “Friday Five” in which it sells five select albums each week for $5, according to The LA Times Blog. These aren’t albums it cannot sell either, they are ones by The Rolling Stones, Robert Plant & Alison Krauss and others popular acts. 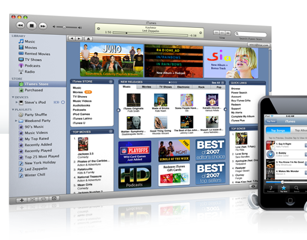 While exact figures aren’t known, it’s clear that AmazonMP3 is nowhere near the sales of iTunes. But that should not make it okay for iTunes to sit back and rest on its laurels.

By all accounts, iTunes is still nowhere near the promise Steve Jobs made at the All Things D conference last year that half of all the songs on iTunes would be DRM-free by the end of 2007. It’s now halfway through 2008.

Granted, the fault for that can’t lie squarely on Apple’s shoulders. The music labels clearly have an interest in seeing a true competitor rise against the iTunes behemoth to Jobs can no longer utterly dominate the industry. But Apple hasn’t done anything very compelling to upgrade its iTunes Music store in the past several months, and a lot of people I talk to are starting to wake up to what AmazonMP3 has to offer.

It will be interesting to see if talk about an “iTunes Unlimited” store heats up again in the coming months. That was the rumored plan in which you would pay more for an iPod but would have unlimited access to iTunes library of music.

MySpace Music is another new digital music store that is expected to pressure Apple in the coming months.

A word of caution to Apple: Microsoft controlled over 94 percent of the web browser industry in 2003. It was completely and utterly dominant, even more so than iTunes is today. As Internet Explorer’s main rival Firefox is getting ready to pass 20 percent market share and continues to spread quickly, it should be a cautionary tale not to be complacent with a seemingly insurmountable lead.