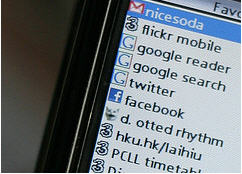 During the voting process for best mobile company (see our MobileBeat2008 voting page), we started to map the mobile landscape.

Led by Matthaus Krzykowski, a consultant at Mobile-Facts, and getting feedback from other experts, we’ve segmented the main mobile sectors. The diagrams below illustrate our conclusions. They highlight the significant trends. We also classify a sampling of start-ups accordingly.

Note that we’ve placed a green arrow by the bubbles where we see the main momentum right now in the mobile industry, i.e., those areas most ripe for pillaging by start-ups. You’ll see the action tends to happen in sectors that are somewhere between their “early adoption” and “adoption” phases.

The diagrams are meant to be a starting point — we hope they’ll spark a debate among Venturebeat readers in the run up to our MobileBeat conference, where we’re commited to asking the larger questions. Specifically, we’re interested in your comments on the following:

Ringtones, wallpapers etc. represent a large proportion of the mobile data being transmitted on wireless networks today. Personalization has been an undisputed meta-trend for 10 years and therefore scores “off the charts” status. Additionally, ringtones are one of the main drivers of mobile advertising.

However, lately there’s been relatively little innovation in the segment and modest increase in overall traction. Therefore we did not put an arrow indicating a trend here. A notable exception may be Modu, a company that produces a mobile computer module (image left) that can be slipped in and out of different devices. If you want a qwerty keyboard, for example, you slip the mobile module into a device with such a keyboard, etc. It got a lot of press at the last big U.S. mobile industry conference, the CTIA. We agree with Om Malik: If Modu isn’t the company that pulls off this innovation, its efforts nevertheless point to a promising trend that someone else will exploit.

There’s also the possibility of a “personalization trend” for mobile internet interfaces and instant messaging (both of which we deal with below). There are many personalized mobile homepage features, for example.

Mobile Shopping
Mobile shopping services are mostly in the incubation phase, as far as we know and from what experts tell us. The mass audiences have not caught on yet. Keep in mind that we’re downplaying mobile services that are driven mainly from the PC web, such as Amazon’s efforts to push sales on mobile phones from its popular website. Let us know if we’re missing something there.

Mobile Money
Like personalization and other categories on this chart, mobile money has been talked about for years, yet it remains an enigma — it seems compelling, but it’s underused. Perhaps here’s why: In the U.S., where consumers, businesses and banks are comfortable with credit cards, mobile phone adoption has been relatively weak. Abroad, where mobile habits are more advanced than in the U.S., the credit industry infrastructure is relatively behind. However, over the past two years, considerable investments have been made in this segment. Obopay’s funding comes to mind here. Quite a few banks around the world have also been experimenting with mobile payments — but unsurprisingly concentrating on offering mobile banking services. Also, the arrival of mobile billing services like Bango can be seen as a success as they enable mobile billing for the long tail. Before, there were few ways for publishers to bill.

Overall, we’re hearing this segment isn’t seeing much traction in most places around the world. Can anyone clarify this mystery for us?

The “ad platforms” segment, however, produced the most intense debate among the experts. Broadly, there are two camps — one arguing that mobile advertising is somewhere between incubation and early traction, the other arguing it’s at the more advanced stage of “acceptance.”

The “skeptics” point to the actual market revenue, which they say is somewhat modest. There is consensus that mobile advertising market revenues are somewhere between $100-200 million worldwide. That’s small, these “pessimists” argue. The sector still needs to take off. The other camp, the “optimists,” point to where usage and mobile advertising has come from. Three years ago, the assumption was that users didn’t want to see advertising on their mobile phones, and advertising was almost non-existent. Since then, ad impressions served have seen “amazing” growth.

Leading ad platform Admob documents its monthly progress in ads served. For us, its growth and the growth of the other ad platforms in the last months is one of the five most interesting mobile trends we see. The growth of ad platforms overall will help more companies monetize their growing “off-deck” traffic, or traffic they get when mobile phone users access them from the browser. Which side of the debate are you on ?

Mobile Health
There are some interesting prototypes being built these days and some trials being run in hospitals. Watching the keynote last month by Apple CEO Steve Jobs at Apple’s developer forum — which included health enterprise apps for the iPhone — we were left intrigued about this segment. Any of you have thoughts on this?

Mobile Entertainment and Mobile News
These two segments are dominated by carriers, and their control of phone “decks.” To a lesser degree, services by established companies branching out to mobile have also emerged (like CBS Mobile or the Weather Channel). Mobile games and video downloads come particularly to our mind.

These companies can leverage their non-mobile presence to push mobile. A few companies, like Jamster, have managed to carve out a piece of the pie. As a result, some experts suggested both these segments are in the “acceptance” phase.

However, we don’t share this sanguine view. We agree that both segments are proven and valid. Yet we note the small number of startups in this area and the limited traction they’ve achieved so far. We’ve put them somewhere between “incubation” and “early traction”.

What are your thoughts? Are we wrong to discount the non-startup successes in these segments?

We had an especially difficult time categorizing companies in this segment. Most of the players have one thing in common: They have social network features of some sort. Other than that, they can be quite different. The green arrow pointing to mobile social networks suggest a rising tide for most of these companies’ boats. However, more work needs to be done to weed out the also-rans, and the momentum of different sub-categories. Note that companies like Zannel or Bluepulse intend to be social networks, but we’ve categorized them according to their messaging qualities.

We’d be particularly interested in getting feedback on this space.

SMS
There are various successful services that base their offerings on SMS. The most prominent examples are probably communities and dating services, like Flirtomatic, which also manage to monetize via premium SMS. Loosely explained, “premium” stands for the extra costs a customer is willing to pay to send an SMS for a particular service. Also, there’s a considerable number of companies serving the infrastructure behind that. This, in our view, is why SMS merits “off this chart” status.

Email
Sending and writing email is clearly a working model in mobile. Most email applications are “push” apps, which deliver shortened emails to your mobile device. What made us rank this segment as being in “adoption” phase and not “off this chart” is that there are still relatively few startups.

IM
Again, we’re downplaying companies that have branched out to mobile from PC web services like ICQ, Yahoo, AOL, MSN or Google. The messaging-heavy mobile social networks have gained considerable traction, yet not as much as some other models.

Mobile Social Networks
Mobile social networks are the main driver of the off-deck traffic and one of the main drivers of the mobile web. The category started to catch the attention of the public when MySpace Mobile and Facebook Mobile arrived on the scene a few months ago. Microblogging services like Twitter have been on the radar longer and continue to thrive despite known challenges (such as the painful downtime of Twitter’s servers); however, Twitter also offers a web site and other services where it sees much of its usage. Media sharing in various forms continues to have very strong growth. This segment has clearly reached adoption and is moving on quickly to acceptance, in our opinion.

VoIP
We’ve already taken a somewhat bearish stance on the crowded VoIP industry during the selection process for Mobilebeat. Despite sizeable investments and quite a few good teams, this segment has not taken off. For your reference, in such a widely adopted service as voice, we used the 1 million monthly active user milestone as a sign of early traction. From what experts tell us, we’re aware of only Skype managing to convincingly crack that barrier. Possibly, the VoIP efforts of communication networks like MSN may prove more successful.

Voice
It’s impossibe not to place voice “off this charts” for what it is: still the basic mobile function. We put it there mostly to keep the different charted segments in perspective. The startup darlings of past years in this field, the mobile virtual networks, have seen a mixed reception from users. Lately, since CTIA in April, Blyk has become the talk of the town

Mobile Web Interface
We’ve chosen to look at the interface area in more detail (by differentiating between search, advanced search, user interface and screen navigation) to indicate the importance of the field. Anyone who manages to offer superior products in this market unlocks value for various other fields (take the standard example of the iPhone and what it is doing for mobile gaming). One massive driver, however, is behind Microsoft’s and, more importantly, Yahoo’s next-generation mobile search services being adopted by the operators and their users. These services simplify core search functions and facilitate access to the mobile web.

In being so sanguine about this segment, we’re hardly being original. In the last few months, Yahoo Go has made waves, and companies like Dashwire or Ontela got acclaims — including from us.

Most services in this segment are still in incubation, yet we have high hopes for innovation in this field as it spurs growth of the mobile web. What do you guys think?

Mobile Mapping and Navigation
For the last two years, mobile maps have been the most successful segment in downloaded applications to mobile phones in terms of revenue.

In fact, if one can claim that any sort of application has reached “adoption,” this is one. Mind you, we understand that in many countries only around 10 percent of all subscribers download apps, and if only a percentage of that, even if high, are downloading maps, we can hardly call this mass “adoption.” Still, as late as the beginning of 2006, the percentage of subscribers downloading applications was estimated at about 2.5 percent. This change continues to be a trend for us.

In the last few months the 3G iPhone and its location-based service (LBS) potential gathered a lot of positive PR. Traction remains small, although some enterprise tracking companies seem to do relatively well. This change of perception toward LBS and mobile applications in general already is a trend for us. Even though some questions remain, there is a good chance that after nine years of trying, LBS may finally be about to take off.