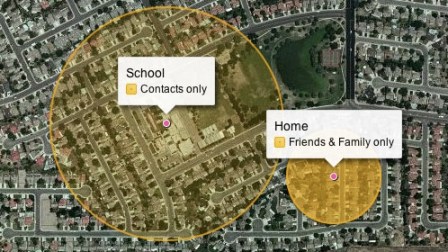 Flickr is introducing a new security feature intended to keep creepers away from your most sensitive location information.

“For example, you might want to create a geofence around the your home or school that only allows Friends and Family to see the location of the photos you geotag in that area by default,” wrote Flickr engineer Trevor Hartsell on the Flickr developer blog.

Five years ago, Flickr introduced geotagging, a feature that let users specify the location where the photo was taken and placed the photo on a map. (Many new cameras and smartphones automatically add this information to photos.) Since then, around 300 million photos and videos have been geotagged on Flickr.

“A few years ago, privacy controls like this would have been overkill,” wrote Hartsell. “Geodata was new and underused, and the answer to privacy concerns was often, ‘You upload it, you deal with it.’ But today, physical places are important to how we use the web. Sometimes you want everyone to know exactly where you took a photo. And sometimes you don’t.”

In the past, the privacy settings for geodata have had to be managed by hand on a photo-by-photo basis. With geofencing, photos around your designated areas will automatically have their own privacy settings.

As Hartsell explains it, “Geofences are special locations that deserve their own geo privacy settings. Simply draw a circle on a map, choose a geo privacy setting for that area and you’re done. Existing photos in that location are updated with your new setting, and any time you geotag a photo in that area, it gets that setting, too.”

For many users, this new privacy setting should allow them to upload photos with much more peace of mind about who sees what and who knows where they’ve been.