Tuesday, Flickr released a share-to-Pinterest button that will ensure all pinners past and present properly attribute images plucked from Flickr to the source of their inspiration. 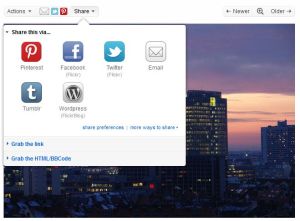 Pinterest is the picturesque, visual water cooler where people “pin” to personal collections to express themselves. But the digital pin-board site, as a fast-growing social network, has quickly become a haven for copyright infringement as members pin photos without credit. Earlier this year, Pinterest released a do-not-pin code, immediately implemented by Flickr, to safe-guard protected works.

Now, the companies hope to encourage responsible sharing with a special “pin it” button for Flickr users. The button, live now, is a one-click tool located alongside Facebook and Twitter buttons in the service’s share menu. The button automatically applies photo attribution during the “pinning” process so that the photographer’s name, the photo title, and a link back to the original work are all attached to each pin. The attributions cannot be edited, staying intact as pins are re-pinned, and have been retroactively applied to all images hosted on Flickr, including those that are embedded around the web. 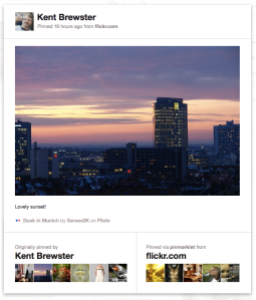 “Attribution is a work in progress and we’ll continue to add additional sources,” Pinterest said in a statement. The company is also rolling out attribution for Vimeo, YouTube, and Behance.

Flickr and Pinterest first entered into talks around attribution a few months ago after observing that the Yahoo-owned photo-sharing community had become a top three source of images for the inspiration site, Flickr head of product Markus Spiering told VentureBeat. The companies have a joint interest in respecting the rights of content creators, he said, and together they set about hammering out a solution that would appease photographers and pinners alike.

With attributions retroactively applied to pins, Flickr photographers will get more visibility and the photo site will likely experience a bump in visits, Spiering said. Flickr also anticipates a significant pop in the rate at which images are pinned to Pinterest.

Today’s Flickr update is the fourth in a string of upgrades that the service has planned for this year. Future improvements will re-imagine the product experience in terms of engagement, Spiering said. Flickr, he added, has also made mobile initiatives a high priority for this year.