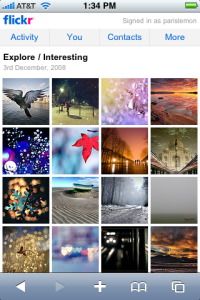 Yahoo’s online photo sharing site Flickr today rolled out the new mobile version of its site. Phones such as Nokia’s N Series, the Samsung L870, phones with Opera Mobile browsers, Android-based phones and, yes, the iPhone (and iPod touch) can now access the new version of the site at m.flickr.com.

The new site, which iPhone users have been able to see in beta form since October, looks great. It reminds me a lot of the original Facebook site that was built for the iPhone after it launched in 2007. It has nice, easy-to-click tabs along the top that take you to any new activity on your photos, a stream of your photos, your contacts and other areas like search. The site is very responsive and pictures look great on it.

But the big news is that this new mobile site can also play Flickr videos. While this functionality is only working right now for the iPhone and iPod touch, it should be coming to other handsets in the coming weeks, a post on Yahoo’s blog notes.

Video playback on the iPhone works well. Since Flickr videos are Flash-based, and Apple still doesn’t support Flash, it looks as if Flickr is doing the same thing that companies like YouTube do — creating QuickTime-compatible videos encoded in the H.264 standard. Because of this, when you click on a Flickr video’s “play” button, it will actually load up a QuickTime player to play the video.

One thing you cannot do from this web-based app, however, is directly upload to Flickr. Instead, you’re asked to use the upload-by-email approach from your mobile device. While it works fine, it’s kind of an annoying process and begs the question: When will Flickr get a native iPhone app?

Going back to Facebook’s original iPhone-optimized website — that, of course, was a web-based application, since the iPhone didn’t allow for third-party native apps at the time. But when Apple started allowing third parties to make their own apps, Facebook was one of the first to launch a native one. Flickr has yet to do that despite several other developers launching their own apps based around Flickr, such as Mobile Fotos.

I have heard whispers that a Flickr iPhone app is in the works, but this launch and the fact that there still isn’t one some five months after the App Store launched clearly makes it seem as if that’s not a priority. And that’s fine, the other apps built around Flickr do a fine job, but I’d assume Flickr could do a better job with its own app.

The company notes that it’s seen a 50 percent increase in the number of people who have accessed its mobile site in the past year. Perhaps with a native iPhone app, it’d see a surge in uploads from mobile devices as well. 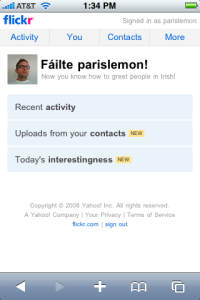 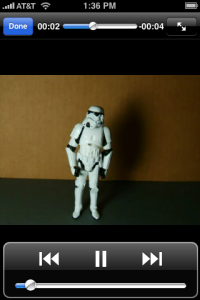