Twitter’s expanded tweets party is minus one VIP guest, but several other social services seem eager to make an appearance. The Yahoo-owned Flickr, alongside the release of a new app for iPhone, threw in support for Twitter Cards this morning, bringing its newly filtered captures to tweets near you.

Flickr vice president Brett Wayn hinted about the integration in a blog post this morning. Head of product Markus Spiering confirmed to VentureBeat that the Twitter Cards update went live early this morning. 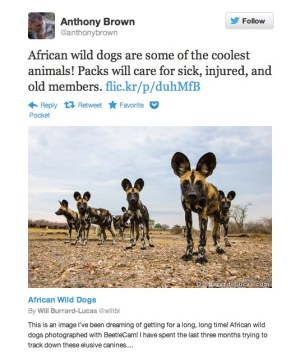 Now, when you share a photo from Flickr to Twitter (from the new iPhone app or anywhere else), that photo shows up right inside your tweet, meaning your followers can enjoy the capture without leaving Twitter. Flickr previously employed a custom integration that enabled Twitter desktop users to see photos in-line with tweets, Spiering said, but the Yahoo photo property reworked the functionality to make its photos viewable inside Twitter’s mobile apps as well.

“When you think about what a user really wants, if you use the Flickr app, you chose Flickr as your photo service, and you upload your photos to Flickr,” Spiering said. “But also you make the explicit choice to share somewhere else. As a user, your expectation probably is … that you want to have your photos look as best as possible on the destination that you share them to.”

In-tweet Flickr photos are powered by Twitter Cards, also known as expanded tweets. Third-party partners can work with the information network to put their content inside your tweets for instant gratification. A smattering of companies, most recently Pinterest, have worked with Twitter to get their content in front of more people. But not Instagram. The hot photo-sharing app collected its square, stylized shots and went home.

With both Twitter and Flickr now offering their members photo filters, some could now see the companies as competitors. Flickr, however, desperately needs support from the hipper, more popular Twitter if the veteran photo-sharing service is to make a comeback. It also appreciates its relationship with Twitter, Spiering told me.

“For the mobile launch, it was important to us that we fully embrace Twitter’s platform and capabilities to provide the best photo-sharing experience for Flickr users,” he said.