Fora.tv, a video site that some have called the “C-Span of the Web” for its intellectual video archive of conferences and symposiums, has raised a $4 million first round of funding.

The site has relatively little traffic, compared to the big, more general video sites, but its serious approach — and presumably educated audience — is likely what attracted the investors, who include William Randolph Hearst III, Adobe Ventures and others. Hearst and Adobe were investors in the original $2 million seed round.

Beet.TV had the scoop on the news, and also mentions the site now allows sponsors to add content to the site’s video archive.

However, with so much content around the web, and so many organizations carrying their own archives, it’s not clear why viewers will be interested in sponsored content from folks like Pfizer and Chevron, who back the site. 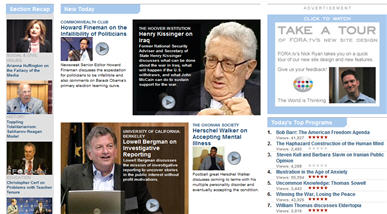 There are other sites with intellectual content, from Ted.TV to BigThink, and even Charlie Rose. The only way this site will really gain viewers is if it continues to stay on theme, and consistently tries to pull in relevant “thinking” videos of the day in one place, so that it can compete with these others. Or it just becomes a library, which is less interesting.

The San Francisco company organizes its video around various topics and channels.