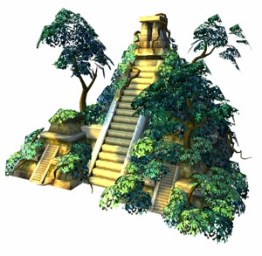 Somewhere off the coast of northern Africa, near the Canary Islands, there’s a perfect rectangle that lies underwater. It resides in a place long considered a possible location of the mythical lost civilization Atlantis. And it was found using Google Earth.

Wait, hold on a second. You mean to tell me that what scientists and crazies alike couldn’t find for thousands of years was discovered by a 38 year old man in England sitting at home on his computer? It sounds absolutely ridiculous, but unlike the case of the guy who claims to have found $3 billion in treasure on Google Maps, not everyone is writing this off. The Atlantis “experts” are saying this could in fact be the resting place for the land said to have disappeared into the ocean thousands of years ago, according to the Telegraph.

Of course, as my VentureBeat colleague Anthony Ha asked, “Is being an Atlantis expert kind of the same as being a Klingon expert?” A fair point, I think, given that up until now the best evidence people seem to have of Atlantis’ existence is the philosopher Plato’s account written in 360 BC — and as he tells it, it actually sank some 9,000 years before his lifetime.

Don’t get me wrong, I love the History Channel, and Google Earth is an awesome tool. But what is the likelihood, in this age of satellites and underwater mapping, that Google Maps’ new underwater feature would be the tool to turn up what would be that greatest archeological discovery ever? Given this and the $3 billion treasure claim, perhaps Google should consider a new revenue model: A cut of every bounty made using its tools.

And speaking of rich bounties, forget Atlantis, where on Earth are the Seven Cities of Gold? Those are at least thought to be much more recent and are presumably not under the ocean. I’m ending this piece now to boot up Google Earth and begin my quest to find them. Wish me luck!