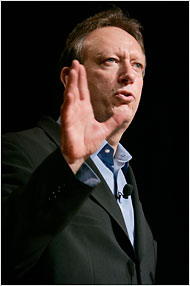 So maybe there was a little something to that Times report about the Microsoft-Yahoo deal after all. Former AOL chief executive Jonathan Miller is apparently attempting to raise money to make a run at buying a piece of — or all of — Yahoo, The Wall Street Journal now reports.

Miller, who is said to be talking with private equity and sovereign wealth funds, would need to raise something in the range of $28 to $30 billion to buy the company at a price of $20 to $22 a share. That’s obviously a lot of money, and the WSJ’s sources are skeptical that Miller will be able to get that much in today’s financial climate.

Over the weekend, a report from the UK’s Times Online said that a deal for Microsoft to buy Yahoo’s search business was close to going through. That of course didn’t happen, but the Times did say that Miller and his Velocity Interactive Group partner Ross Levinsohn were involved and could become the team to take over Yahoo. Interestingly, the report said that while Microsoft would provide the bulk of the money for a deal, outside investment would provide the rest.

Levinsohn flat out denied such a deal to us over the weekend, saying that there was “no truth to it,” and that it was “news to us [presumably Velocity].” While there may have been no truth to that specific report, this new article claims that Miller and Levinsohn have in fact been in behind-the-scenes discussions with both Yahoo and Microsoft for months trying to make a deal between the two sides happen.

Miller and Levinsohn have also apparently met with Yahoo in the last few weeks while the company searches for a new chief executive to replace the departing Jerry Yang, paidContent reports — also noting that it’s possible the WSJ is reading too much into Velocity making presentations around the world to raise a new fund.

We’ve once again reached out to Levinsohn and will update if we hear back.

With this new Miller-led deal, it’s not clear whether Microsoft is playing any role. (Though if such a deal was struck, you can bet their name would pop up again in a hurry.) And other investors and private equity groups are also thinking about making moves at Yahoo without Miller, according to the WSJ. The line of thought seems to be that Yahoo’s stock, valued in the $30 a share range after Microsoft made its big offer earlier this year, is now a steal hovering around $10 a share.