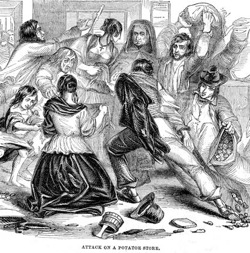 This country may be in the midst of a recession, but forget about that, there’s a potentially much more serious problem out there: The country is running low on iPods!

At least, that’s the case if inventory checks made by Kaufman Bros. analyst Shaw Wu are accurate. Amazon, Best Buy, Wal-Mart and Target are all experiences shortages of iPods on some level, Wu reports. (I just checked Amazon, and while all seem to be labels as “in stock,” a few models only seem to be available through 3rd parties.) If true, strong demand on Black Friday and Cyber Monday is probably to blame. Apple’s web site and its own retail stores don’t appear to be affected by this famine yet.

Despite my snark, this is potentially good news for the economy. If a relatively premium device like the iPod is still experiencing strong demand, and early Black Friday and Cyber Monday sales estimates are doing better than expected, perhaps there is hope that the economy can turn around faster than some people had hoped. Of course, no matter how many iPods people buy, that isn’t going to fix the fundamental problems that caused this collapse in the first place.

Last holiday season, Apple set a record with 22 million iPod sold, according to CNET. This year, analysts had been projecting something closer to 18 to 19 million given the rough climate. However, given these new checks, Wu thinks Apple could come very close to last year with 21 million iPods sold.

I, for one, knew iPod sales would be strong this holiday season. I base that only on the fact that everyone I know will not shut up about getting the new purple iPod nano.