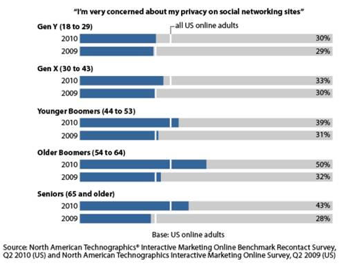 Concerns about privacy on social networks have increased drastically since a year ago among older users, but not younger ones, a new study shows.

Forrester Research’s North American Technographics survey, conducted in the second quarter of 2009 and 2010, asked participants to state their level of agreement to the statement “I’m very concerned about my privacy on social networking sites.”

In short: The change in the level of concern correlated almost directly with the age group.

The media has made much of privacy in the past year, particularly with Facebook. After changing its default privacy settings earlier in the year, the company was on the receiving end of much criticism, finally introducing simpler, albeit more open, controls. More recently, it was accused by the Wall Street Journal of letting third-party applications transmit user information to advertisers. When it rolled out new groups and location features, users complained about the ability for others to add them to groups and announce their location without their permission.

Against that backdrop, the age correlation found in the survey is intriguing. It suggests that the younger generation is relaxed to the point of passivity when it comes to privacy. Is that despite their heavy use of social networks, or because of it?

It may be that privacy concerns are less related to one’s generational cohort than one’s life situation, which changes as one ages. In a world where employers check prospective hires’ Facebook profiles, concern with sharing drunken party photos and edgy status updates may grow.

Then again, having grown up with the Internet around, comfort with sharing online is just a part of the game for Gen X and Gen Y. For the older cohorts, trust and privacy are real ordeals.

Facebook, meanwhile, has been doing its best improve its impaired privacy reputation. The company released a tool last month that lets users download all the information they’ve ever entered into the site — including photos, messages, and status updates. While it hasn’t backed down on letting users automatically add and tag their friends, it does let them opt out of those features.

The world’s biggest social network may well figure out a middle ground on privacy before its first users reach middle age.