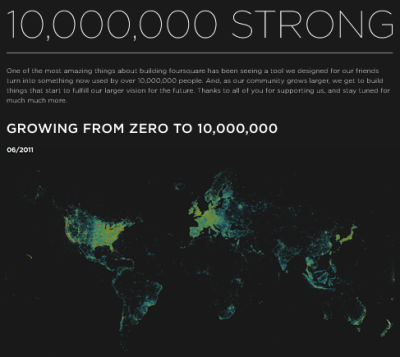 Location-based check-in leader Foursquare has just announced it now has over 10 million users around the world.

To accompany the milestone, the company has created an interactive map that shows a series of colorful dots that slowly spread around the globe. Each dot represents a user and the growth of the company, now a little more than two years old.

In addition to the map, Foursquare also added several statistics about where users are checking in. Several tops brands are seeing the most check ins, including Old Navy, Bank of America, 7-Eleven, Home Depot and Target. Popular cities include London, Hong Kong and, of course, New York City, which also includes a shout-out to Mayor Michael Bloomberg, who recently dubbed April 16 official Foursquare Day.