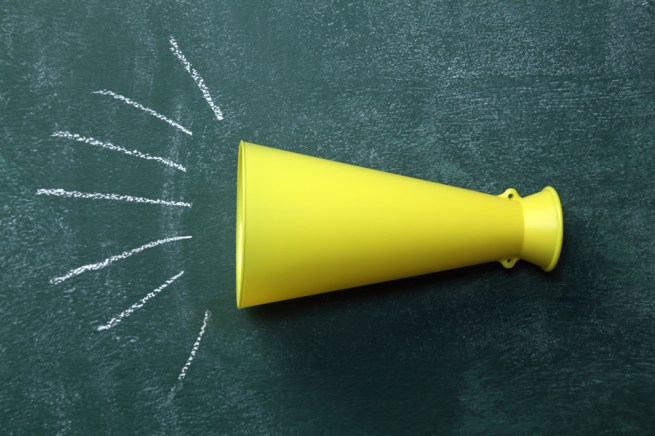 Change is underway at check-in service Foursquare, which is one month into a radical redesign that has refocused its entire service around social interactions. Today, the social network  is giving venues a way to communicate with customers, and in the process is laying the foundation for upcoming advertising products that will help Foursquare make money.

Local Updates, now rolling out to the nearly a million merchants who have claimed their businesses on Foursquare, is in its simplest state a status update option for business owners. The free-to-use feature is designed to help merchants reach nearby and loyal customers with timely messages that can include text, one to three photos, and an attached special. 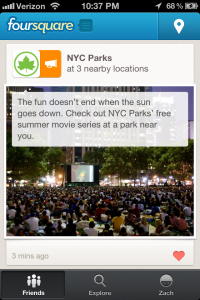 “This is a continuation of the all-new Foursquare that we launched for consumers,” Foursquare product manager Noah Weiss told me in an interview. “Merchants will be able to actually, for the first time, have a communication channel with customers within Foursquare and be able to hopefully help drive those people into their store.”

Merchants who post Local Updates will find that their messages are dispersed to an algorithmically selected group of people Foursquare has determined are most interested in receiving their messages. This boils down to customers that have checked into the merchant’s business several times or who have “liked” the business on Foursquare, though the company also says it factors in additional signals in determining who to show the updates to. Foursquare will also only show the messages to people who are in the same city as the business.

A Foursquare member who checks-in at H&M a lot or has developed a relationship with Starbucks, for instance, will automatically start to receive local updates from those businesses.

The updates are shown in the “Friends” tab of the Foursquare application and flow inline with updates from the user’s Foursquare friends. Recent updates are also shown to people after they check-in to a business for the first time. Users can engage with the updates by leaving comments or “liking” them, just as they would with an update from a friend. 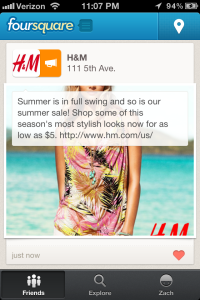 Local Updates have been crafted to work for boutique businesses and national chains alike. H&M, one of Foursquare’s launch partners for the release, can create generic updates that apply to all customers or push out messages that are specific to a particular location.

The release, a boon for businesses, may come as an unwelcome addition to the Foursquare experience for some users. On Foursquare, people don’t follow or friend a company as they do on Twitter or Facebook. This has left merchants with no way to directly reach Foursquare users, other than by creating tips for their own venues. With Local Updates, Foursquare corrects this oversight but also takes on the risky responsibility of determining who to deliver the status updates to. Members easily could be annoyed by the unsolicited merchant updates, which resemble miniature ads. Foursquare, however, believes it can accurately pinpoint just the people who want to receive these messages.

Foursquare, which has more than 20 million members who’ve checked-in a total of 2 billion times, has also yet to monetize its service in a meaningful, sustainable way. But that’s about to change. In giving merchants a voice and a promotional vehicle for reaching customers, Foursquare is also laying the foundation for an ad product that will likely provide merchants with a way to pay to push these messages to a targeted pool of people who aren’t yet their customers.

The company did confirm that paid merchant products are in development but would not detail the timing or nature of those products. The most natural evolution to the Local Updates product, however, would be to provide merchants with for-cost ways to reach Foursquare members who have yet to check-in to their businesses but who are in the area and like similar venues. And Local Updates, as glorified status updates, have all the right qualities to become Foursquare’s version of Twitter’s Promoted Tweets or Sponsored Posts. 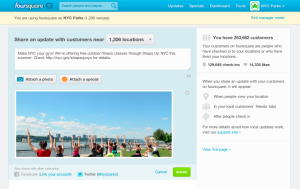 Foursquare, as part of the Local Updates release, is also relaunching the merchant dashboard and releasing new merchant tools to give businesses better ways to manage their venues and track activity. The dashboard enables businesses to post Local Updates but is also designed to show merchants how people are interacting with updates and how their loyal customer basis is growing and to provide them new tools to manage multiple venues, Weiss said.