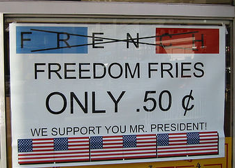 If you live in France and want to buy an iPhone but refuse to sign a long term commitment with the French carrier Orange, there’s good news today: You don’t have to. A recent government ruling in that country threw a wrench in Apple’s exclusive deal with Orange to sell the device, and the French store Fnac is taking advantage of that ruling by selling the phone online without a contract, as MacNN points out.

The problem is, it’ll cost you 799 euros ($1,122) for the 8GB version or 899 euros ($1,262) for the 16GB one. And it’s not entirely clear if these devices are actually open and free to use on other networks or if you still have to use Orange’s network but just don’t have to sign a long-term contract to get one.

An easier solution would be to buy the phone and pay the contract termination fee, which in the U.S. is under $200 (but I’m not sure what it is in France). Of course, that would also be a bit dishonest, since you would then have to unlock your iPhone to use it without the contract.

Other markets sell the iPhone contract-free because of varying laws in various countries. For example, in Belgium, the contract-free iPhone is 529 and 619 euros (for the 8GB and 16GB versions respectively). Right before its launch in the U.S., AT&T said that it would eventually sell the device contract-free here at a significant markup but has yet to come through with that promise.

In not unrelated news, that iPhone 3G software unlock should be available any day now.